Manuel Pellegrini wont give up hope of Premier League title 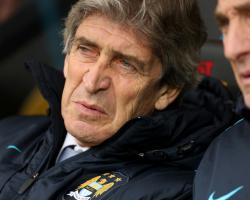 Pellegrini had said the visitors would need to win at least nine of their remaining 10 games to win the title, so victory at Norwich was a must.

But it was Alex Neil's relegation-threatened side who came closest to scoring as Patrick Bamford hit the crossbar in the first half.

The point was just Norwich's second in 10 games and the clean sheet was their first since their most recent win, over Southampton at the turn of the year, while City are nine points behind leaders Leicester.

"Every time you drop points it can be more difficult, but that will not change my mind," Pellegrini said.

"If you mathematically have a chance to do it, you must always think you can do it

If you ask me before the first game of the season what we must do, we must try to win all the games and we continue with the same mentality.

"And at the end of the season we'll see how many points we can have and in which position we'll be."

"The most important thing now is to be focused on the Champions League game we have to play on Tuesday, to try to qualify for the next stage," Pellegrini added.

"After that we have to play against Manchester United on Sunday and try to win again the three points."

Pellegrini expressed satisfaction with the performance, but, with the exception of Sergio Aguero, his team were disappointing

Aguero was denied by John Ruddy in the first half and felled on the edge of the area in the second, falling into the box, but could not break the deadlock.

"We started from the first minute of the game trying to score, but we couldn't," Pellegrini added.

"We had a very good attitude, very good possession, but we couldn't create the space that we needed in the last third.

"What we normally do in an easy way, today we couldn't do it

We tried different ways to create space, but we couldn't."

Joe Hart appeared to disagree with his manager, saying the visitors did not do enough to win.

He told Sky Sports: "I think myself and John Ruddy could have had the afternoon off today

I don't think we were good enough to win it if I'm honest."

Graham Dorrans had a good opportunity for Norwich in the second half, but did not hit the target.

Neil believes Norwich, who are still to play Newcastle and Sunderland at Carrow Road, can avoid the drop.

"I didn't need that performance to strengthen my belief," the Scot added.

"I believe we're good enough to do it

What it will do is help the squad and the fans and everybody connected with Norwich.

"The amount of effort the players are putting in to stay in this league can't be questioned and the fans responded.

"We need to win games

It's as simple as that."

It's just one of those where if you're not going to score, it's really important you keep it tight at the back.

"Our game management, our decision-making in the game was better than recent weeks."

Winger Nathan Redmond went off in the first half and Neil added: "(He) just went over on his ankle

He just rolled it.

"It's a concern for us because he's a key player

We're hoping it's not going to be too bad."