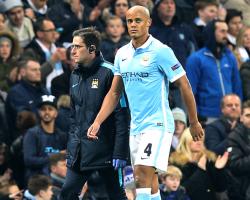 Pellegrini has also revealed the defender's latest calf injury is a fresh one affecting his other leg, and not a recurrence of the problem that has already blighted his season.

Kompany suffered his fourth calf injury of the campaign - and his 14th since joining the club in 2008 - when he pulled up in the opening minutes of Tuesday's Champions League clash with Dynamo Kiev at the Etihad Stadium.

The 29-year-old's national coach with Belgium, Marc Wilmots, has said the player could be out for five to eight weeks but Pellegrini has backed up an initial prognosis of around one month.

Speaking at his latest press conference, Pellegrini said: "I'm talking with the doctor

I think Vincent has an injury in the other leg, not the same calf as last time.

He can still play a part in the season.

"It is not really in the calf, but a little bit higher behind the knee

It is similar to the one (Aleksandar) Kolarov had one month ago and he was delayed three weeks to one month before coming back."

The loss of Kompany is a major blow to City at a critical stage of what has been an inconsistent season.

City have fallen off the pace in the Barclays Premier League title race and could even be facing a battle to cling onto a top-four place.

Arch-rivals Manchester United are one of the sides hoping to close up behind them and that has placed extra importance on Sunday's derby at Eastlands.

United have themselves endured a difficult campaign, and suffered the indignity of a Europa League exit at the hands of Liverpool on Thursday, but Pellegrini expects that to count for little come the weekend.

The Chilean said: "Always a derby is dangerous

It doesn't matter the position of both teams

If it's a derby of the Premier League it is doubly dangerous.

"Both teams will try to arrive as near the top of the table as they can for the next season."

In terms of finishing at the top, it is a task that is now looking difficult for City, who for much of the season were regarded as title favourites.

They could even be fifth by the time they kick off against United.

Yet Pellegrini continues to insist he will not give up the chase.

He said: "In football when you have a mathematical chance you cannot think you cannot do it

That is not a winning mind

You must always think you must do it.

"The more points you lose it's more difficult, but you must have the mentality to win the next game and after that you will see which team has the most points."

He said: "Nico is running but it's a risk if he takes another kick in the same leg

We'll assess him on Saturday and decide."