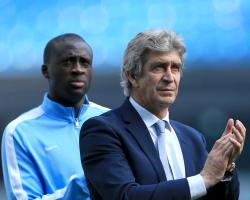 The Chilean will take charge of City for the last time on Sunday as they travel to Swansea for their final Barclays Premier League game of the season.

Pellegrini has won three trophies in his three years in charge but form in his last season has been inconsistent and a Champions League place has not yet been secured.

But when asked at his final pre-match press conference on Thursday how he felt about his time at the club, the 62-year-old spoke proudly about his achievements.

"The only thing that we couldn't be the best at is our defence - that was Chelsea, they conceded just four fewer goals than our team - but the goal difference is huge between us and all the other teams.

"During the three seasons, the fans always tell me that they enjoy our games

Of course, it's impossible to play all the games well, but I think the amount of goals we scored in the three seasons, I think it's 50 or 60 more than any other team, so I think that's an entertaining team, and a team that wins titles and one that has progressed in the Champions League.

"It's about a style, and for me it's important to be the highest-scoring team for three seasons, to be always in the Champions League and to win three titles."

Since Pellegrini took charge in 2013, City have accrued more points than their rivals, with Arsenal's 222 the closest to their 230

"I'm happy, but I think you must always think you can do better," said Pellegrini.

Following Manchester United's loss at West Ham in midweek, City are now in charge of their own destiny as they seek to secure a top-four place

Because of their superior goal difference, realistically they only need a point

Achieving that would be Pellegrini's parting gift.

Asked how he would like to be remembered, Pellegrini said: "For a team that always wanted to play good football, to always try to score, not just trying to get a result and when you score a goal, the game is finished.