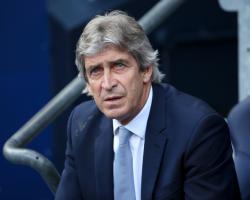 Pellegrini will take charge of City for the final time on Sunday as they travel to Swansea for their last Barclays Premier League game of the season.

The match itself has plenty riding on it, as City look for the result necessary to secure Champions League football for another season, and it also marks the end of another chapter in the club's development.

Pellegrini won two trophies in 2014 after repairing the damage from Roberto Mancini's volatile - albeit successful - reign and added another with Capital One Cup victory this season.

But after an underwhelming title challenge, and with the much-coveted Guardiola available, the time has come for the club to move on again and Pellegrini has accepted he must make way.

"I don't feel any bitterness," said the Chilean

"I enjoyed the complete experience, the three years.

"It is a very good job because it is not only a team but a club who want to grow every year.

"I think it is one of the best clubs to manage and every manager that arrives here will be very happy."

After Manchester United's loss at West Ham on Tuesday - a game Pellegrini claims he missed because he was "travelling" - fourth-placed City go into the game with a two-point advantage.

With a vastly superior goal difference over United, a draw is probably all they need.

Pellegrini said: "It is so important (for it) to just depend on what we can do

So we need to play well and focus on the game

We don't need to know the other scores

We are not thinking about anything more."

After that, Pellegrini will begin the search for a new job in earnest.

The 62-year-old, who has been linked with Everton and Valencia, said: "About the future, we will talk in the correct moment

We will see on Monday."