Manuel Pellegrini- Manchester City should have had a penalty 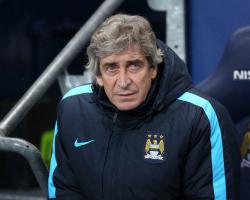 Raheem Sterling appeared to be brought down by John Stones in injury time as City looked to make their dominance of a lively Barclays Premier League clash tell.

But referee Roger East gave only a goalkick and City's last chance to claim another three points for their title challenge was lost.

Pellegrini said: "I don't think I need to give my thoughts about that action

The whole stadium could see it was a penalty

It was so clear, so near for the referee and both legs of Raheem were taken

It was a clear foul from Stones but if the referee doesn't whistle for it, we can't say anything about that."

Despite the scoreline, the contest was an entertaining one, with both sides having opportunities in the first half

City upped the tempo after the break and created several good chances but Everton, and most notably goalkeeper Tim Howard, held firm.

Pellegrini said: "We did enough to win the game, especially in the second half

In the first 45 minutes it was a very close game with not many chances, maybe one or two in each box, but in the second half it was complete dominance by us - of possession, of shots, of saves from their goalkeeper."

Martinez said: "What you want as a manager is a referee who is 100 per cent when he gives that decision.

"The way I saw it, I see John Stones going to ground trying to block the trajectory of the ball

All of a sudden Raheem Sterling is quite happy not to play the ball and he wants to invite some sort of contact.

I don't think the referee could have done it any better

If you are not certain, you don't want to gamble in a decision that could have been so damaging from our point of view

I felt Roger made the right call there."

Everton beat City in the first leg of their Capital One Cup semi-final at Goodison Park last week and Martinez was again pleased with the performance.

He said: "I thought in the first half we were very good

I thought we controlled the game for long spells, probably more than Manchester City and we had two big moments in front of goal - Gerry Deulofeu's chance and Leon Osman with an incredible bit of technical ability.

"The second half was a little different

We found it difficult to impose ourselves but we had to show resilience and concentration and defend well."

Many fans were not at the ground by kick-off - the Everton team coach was even held up earlier on - but the game went ahead as scheduled at 7.45pm.

Martinez said: "I think it was chaotic around Manchester city today, and the access to the Etihad Stadium was very difficult

Delaying kick-off - I am always in favour of to allow fans to watch from the beginning, but it is not in our hands to make those decisions.

"We had to adapt to whatever the police and safety officer decided and we were quite happy to go along with it."

Pellegrini said: "I didn't know that

It was strange to see the stadium not full, but if it was a traffic problem, then I cannot say anything about that because it's not my duty."