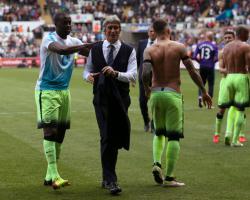 Many will feel that a fourth-place finish in the Barclays Premier League for a squad which started as favourites to win it represents considerable under-achievement.

But Pellegrini suggested the mid-season announcement that Pep Guardiola would be arriving as manager this summer had a huge impact on his squad.

City's 1-1 draw at Swansea on Sunday effectively sealed their place in next season's Champions League.

Manchester United can still theoretically beat City to fourth place in the Barclays Premier League after their home game against Bournemouth was postponed because of a security alert at Old Trafford.

But United would have to win the rearranged fixture by a 19-goal margin, and Pellegrini certainly felt qualification was guaranteed as a three-year reign in which he won the Premier League once and the Capital One Cup twice came to a close

"It is a good season because we won the Capital One, after that we reached the semi-finals of the Champions League," said Pellegrini

"It's not easy for the first time in the club's history

Maybe we didn't play in the way I like it against Real Madrid.

"But we finished by qualifying the team for the next season and, unfortunately in the moment that we had to prioritise one competition, we couldn't continue playing the FA Cup.

"I think it's a good season, a good cycle of three seasons here, to win three (trophies)."

"One of the most difficult things was to finish this season after they announced this club will change (manager) next season," said Pellegrini.

"There was an atmosphere inside the team, because it is not easy when you are involved in all competitions.

"It is not easy for the players to read every day that '11 players will go out, these are coming, these are finished'.

Swansea, who for so long flirted with relegation and have had three managers this season, ended up in 12th place after a strong finish to the campaign

Francesco Guidolin signed a new two-year deal in midweek and hopes to build on the foundations he has put in place since his January arrival.

"We do not want such a stressful season," said Guidolin.

"For my players it has been stressful and we must be ready for another important season, and I can say only we must start well.

"It will not be easy, but we have shown we are a good team and this is a good memory to take into the summer."