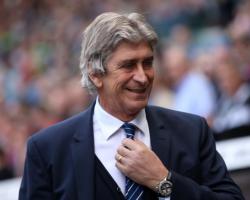 Pellegrini's final game in charge on Sunday, a 1-1 draw at Swansea, effectively booked City's place in the Champions League next season when Pep Guardiola will be the manager.

Manchester United need to beat Bournemouth by a 19-goal margin in their rearranged home fixture on Tuesday to deprive City of fourth spot in the Premier League.

But Pellegrini admits his focus will be elsewhere as he begins reviewing his job options after three years at the Etihad Stadium.

"I will now starting thinking about the future," Pellegrini said.

"I don't want to decide just in one week

I will see different options."

Pellegrini has extensive experience managing in Spain with Villarreal, Real Madrid and Malaga all on his CV.

But the 62-year-old Chilean, who is among the bookmakers' favourites to be appointed the next Everton boss, does not rule out managing in England again.

"I am fortunate to work in five countries," Pellegrini said.

"But the Premier League is the most important in the world.

"The stadiums are full capacity, a party every game, fans uniting and singing.

It is important for managers to have this experience."

Pellegrini also revealed he would not speak to his successor Guardiola about the challenges facing the Spaniard next season following his move from Bayern Munich.

"I don't think that we need to speak," said Pellegrini.

"He knows perfectly what is this club, he has friends inside here.

"He is a very important manager in Europe, so I am sure he will have all the information.

"So I think he will receive a club he deserves, and I am sure that this club will continue improving in the future."