Manuel Pellegrini believes Manchester City are in a competitive position 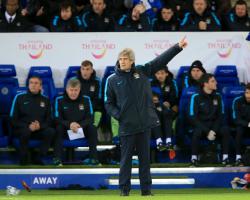 City are third in the Barclays Premier League after 19 games, three points behind leaders Arsenal.

But Pellegrini does not think that matters as none of the leading contenders have been able to find consistency.

The Chilean said: "Of course we are in a good position

Always the best position is to be top of the table but I think that this is a special season in the Premier League.

"With the amount of points we have at this moment, it is not good to fight for the title in a normal season, but we are now just three points behind the leaders

I hope we are going to complete with a very good second part of the season."

Yaya Toure's late consolation in the 2-1 loss at Arsenal on December 21 was also their only goal in their last five away games.

But Pellegrini saw positives in Tuesday's goalless draw at second-placed Leicester and the team will look to build on that as they travel to Watford on Saturday.

He said: "If we didn't win the last games that we played away, it is because we must improve.

"But it was good to have a clean sheet and for me the best thing from that game was continuing to playing the same way we did in the last two games.

I think we also played very well against Leicester

Maybe we have to finish a little bit more but I think we are in the correct way."

Promoted Watford have been one of the season's surprise packages and go into the game against City at Vicarage Road just two points off fifth place.

Pellegrini said: "Maybe at the beginning of the season it can be a surprise, the same as Leicester, but when you play 19 games, half of the season, and you are still talking about Watford or Leicester, they continue playing in a good way, it is because they have important players in a good moment of high performance and managers that are doing very well their job."

City's clean sheet against Leicester was their first this season without injured captain Vincent Kompany, who could be out for another month with calf trouble

Left-back Gael Clichy and midfielders Fernando and Fabian Delph are back in contention.