Mangala ready to show his best 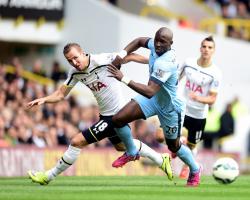 Arriving in a ÃÂ£32million deal from Porto, a lot was expected from the highly-rated 24-year-old central defender.

The transition has been far from seamless, though, and Mangala has endured a fair few tough moments in his first Premier League season.

There was the odd hairy moment in Sunday's 1-0 win at Tottenham, but the France international is confident of kicking on next term.

"It was a little bit difficult for me," Mangala said, assessing the campaign

"I need to adapt to the Premier League.

I think I am used to playing each kind of game and I am very confident for the other seasons and the next season now."

Mangala's adaptation has no doubt been hampered by City's own struggles, with their tame title defence ended by Chelsea on Sunday.

However, they can at least look forward to Champions League football next term after the win in north London all but secured a top-four finish.

That was far from certain a few weeks back and now Manuel Pellegrini's men are aiming to finish second or third, which would see them progress straight to the group stage.

"We are happy because we knew yesterday Manchester (United) lost against West Bromwich," Mangala said.

"It was important for us to win this game and the most important thing is three points, so it was a good game for us.

"We have three games and now the objective is that we need to finish second or third to go straight to play the Champions League next season."

Mangala knows City would not have been celebrating an eighth win in nine Premier League matches against Tottenham was it not for Sergio Aguero and a man-of-the-match display from Joe Hart.

"For me, I enjoy playing with Joe," he said

"He showed today he is a good goalkeeper

It is important to have a goalkeeper like that behind us.

"I think he is a young player, he has a good career ahead of him and we need to respect what he does.

"The first goal started with Joe

He recovered the ball and played it quickly to David and finished with Kun, he scored a very great goal.

"It was very important for us today - thank you Joe today and thank you Sergio."

The defeat almost certainly extinguishes Spurs' hopes of Champions League qualification and left defender Eric Dier ruing what could have been.

"I think we played well for the majority of the game.

"Obviously Man City are a good side and had spells when they were better than us, but I think we played well and obviously missed a few chances which is disappointing.

"If you don't take your chances, that's what happens, especially against big teams like Man City

You've got to take your chances and we haven't done that."