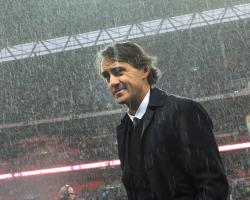 Roma need to be vigilant in defence, keep focus for the full 90 minutes and be clinical in attack," Mancini told Monday's edition of sports daily Gazzetta dello Sport.

"A full-strength Roma can beat City, but the absences of (Daniele) De Rossi, (Leandro) Castan and (Davide) Astori could make them more vulnerable."

Roma will likely be without Italy midfielder De Rossi due to a torn calf muscle, while Astori and Castan are still recovering from injury.

Exciting Roma forward Juan Iturbe, meanwhile, has been named in Rudi Garcia's squad for Tuesday's game, suggesting he has recovered from a thigh knock and will play a part at some stage.

Mancini added: "I see Iturbe has made the squad: he can give City problems

On the counter he can be quite devastating."

The Italian, meanwhile, admitted he still feels very close to the club he led to Champions League qualification and the FA Cup in his first full season in charge, and the club's first league title in 44 years the following season.

"I still feel City is a part of me," added Mancini

"I have fond memories of almost all the players I worked with at City."

Manchester was the scene of one of Roma's greatest humiliations -- a 7-1 demolition by City's cross-town rivals Manchester United in the Champions League quarter-finals in 2007.

However Roma are currently undefeated in Serie A after five games and are jostling with champions Juventus for domestic supremacy.

Defeat for City, meanwhile, would leave Pellegrini's side in the Group E doldrums

Either way, Mancini said he expects a "spectacular game"

"It will be a spectacular game

City play a different kind of football compared to the other English sides: they keep the ball on the ground and move it around a lot, and they're able to vary attacking from the wings to attacking down the centre.

"Roma play football, as we used to say

City are not the United of several years ago

And this could go in Roma's favour."