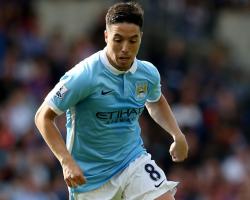 The French playmaker is hoping to return to action in March, having initially feared his season had been ended when he damaged his thigh muscle and tendon in a freak training injury.

"The original estimate by the doctors was that I'd be out for between four to six months and the surgeon told me the same, but I've already done two months and I'm targeting the international break in March to be back properly with the squad," Nasri said in the Manchester Evening News

"My surgeon told me this was a rare injury as the muscle had detached from the bone and the tendon was also 90 per cent detached and had to be stitched back together so it was something that doesn't happen very often."

Nasri, 28, had only just returned from injury when the incident occurred

"We had a session after the October international break and everything was going well," he said

"Then, right at the end I played a one-two with Fernando and the ball was a little bit behind me - we were playing two-touch - and I had the ball ready to shoot but I could see Aleks (Kolarov) coming from behind me.

I went for the shot and as soon as I did, I felt my leg going from under me with no challenge and I just screamed as I hit the ball, because the pain was so intense, and collapsed on the floor."