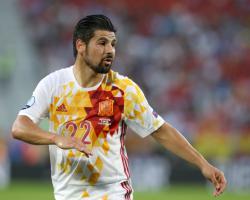 The Spain forward, 29, has agreed a four-year contract to become the second arrival of Pep Guardiola's reign as manager

His transfer represents the second time he will have worked for the Spaniard, having done so when he was at Barcelona before joining Benfica in 2011

"Pep Guardiola is one of the best managers in the world," Nolito told City's official website

"I'll try to bring as much as I possibly can

I'll do everything that the manager asks of me, try my absolute best and do everything I can to try to repeat the form I've shown throughout my career at various clubs.

"It's just about trying to play my normal game and let's hope that I can help Manchester City to win games."

Nolito, whose real name is Manuel Agudo Duran and who has been given the number nine shirt, started each of Spain's four fixtures before their elimination from Euro 2016.

His three seasons at Celta produced the finest football of his career, and a record of 39 goals in 103 appearances.

He is considered a late developer, having not represented Spain before turning 28, and will vie for selection in the most competitive positions in City's squad.