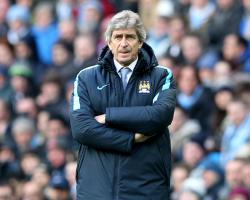 City are playing catch-up in the league after an inconsistent season and sit fourth, 10 points behind leaders Leicester, albeit with a game in hand, ahead of this weekend's fixtures.

Pellegrini believes his team - title favourites for most of the season - are capable of mounting a late charge but accepts there is little margin for error.

The Chilean, whose side travel to struggling Norwich on Saturday, said: "The next four games will be very important to reduce the gap and we will see what the gap is like after the next four games.

"We need to win at least nine

We will see the other results but it will be very difficult if we don't win all the games."

City are used to coming from behind having done so late in the season to take the title in 2012 and 2014.

This time they have fewer points at this stage of the campaign than in either of those seasons, but Pellegrini does not think that matters in an unpredictable year.

He said: "It is not just our team that have less points than two seasons ago

This season is different.

"You must try to have your best players in their best moments for the last games of the season and then we will see what happens, but you cannot give up because you have less points."

Midfielder Fernandinho has also warned people should not write off City too soon.

"I think this would be a big mistake," said the Brazilian

"We have great players and a great manager and we're going to put our efforts into the games we have left to play.

"The team is one of the best in the league

We have a great squad with great players but we have to prove that on the pitch.

"Unfortunately we haven't done that up to now

I hope the next two months - the last 10 games - we can prove that on the pitch and not just talking."

City and Belgium clashed earlier this season over the fitness of captain Vincent Kompany.

He is not able to play a game with the national squad.

"But maybe he and Samir Nasri, and I hope also Fabian Delph, will play one or two games with the under-21s."