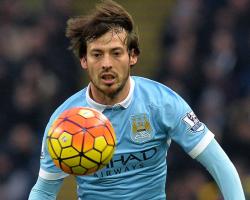 But the Manchester City boss is confident the Spaniard will soon return to top form.

Silva has played 13 games since returning from a month-long lay-off with an ankle injury in November but has not yet rediscovered his best.

Pellegrini has now revealed the 30-year-old has also been hampered by another problem in recent weeks, providing further reason why he was rested for the FA Cup third-round win at Norwich on January 9.

Pellegrini said: "David has had different injuries during the season, that's why I didn't want him to play two games that were very near (together).

"It was not only the ankle

He started with that and one or two weeks before the game against Everton he had a muscle injury that disturbed him a lot.

"But now he is feeling better so I hope he will finish the season in his best performance.

"Every day he is improving

Maybe he's not 100 per cent but I hope that he will return soon to be absolutely fit."

The Argentinian missed 11 games during a 14-game spell through the autumn with hamstring and heel problems but has now scored five in City's last four matches.

Pellegrini said: "It's very important for our squad

If Sergio continues scoring two goals every game, it will be easy to finish the season.

"I hope he will continue playing the same way

Playing the way we do, it will be easy for him to continue scoring."

Pellegrini wants all his attacking big guns to start firing

City are title favourites, and still alive in three knockout competitions, but are yet to stamp their authority.

They are well placed in the Barclays Premier League but still three points behind leaders Leicester despite a star-studded squad that also boasts the likes of ÃÂ£100million pair Raheem Sterling and Kevin De Bruyne.

Pellegrini said: "It's very important that you have all your best players in the same moment in their top performance

I hope that all of them will return to their normal performance in the same moment."

Pellegrini meanwhile has dismissed reports influential captain Vincent Kompany could be out for a further six weeks with a calf problem.

I think Vincent will return in a couple of weeks

It is very important the way he improves in the next two weeks but I think he will be fit before."

The semi-final second leg at the Etihad Stadium is the third meeting between the two clubs in three weeks after they also played out a goalless draw in the Premier League.

The crowd is not likely to be at capacity but with 48,000 tickets sold and at least 50,000 people expected, the attendance will still be the club's biggest for a domestic cup tie since 1981.

Pellegrini said: "I'm sure we're going to have the support of the fans we have in every game here."