With the international break well and truly here, ​Pep Guardiola and Manchester City can take a step back and have a look at where things have gone so dreadfully wrong.

Ten points from 12?! Two points off leaders Liverpool?! What is the matter with them! Sergio Aguero leading the Golden Boot standings with just the six goals from four games?! Something must be up.

In all seriousness, Manchester City have been flying, scoring goals for fun and swatting teams aside. The only blip on their resume is a home draw against Spurs, a game they somehow didn't win.

Reaffirming their title of Premier League favourites, let's see in more detail how they fared in the month of August. However, it is impossible to look past the genius that is ​Kevin De Bruyne. The Premier League's best player since the departure of Eden Hazard, De Bruyne's ability to drive at defences and whip in crosses make him a nightmare to play against.
The Belgian has five assists and one goal in his first four games. The record number of assists in a season is 20 by the great Thierry Henry. However, it would be very tough to say that KDB won't break that record this season, especially with the startling attack around him. He just needs to stay fit.
What a player. If it wasn't for that meddling technology, City would have have had a 100% record, and a thrilling last minute win against Spurs courtesy of Gabriel Jesus.
The fact that I've had to say VAR sums up just how good they have been so far. ​Every ​Manchester City performance this season has been a good one, but their opening game demolition of West Ham was pretty impressive.

No early season cobwebs, no rustiness, back to business for the reigning champions as they put five past a West Ham team who didn't even play that poorly.

Oh, and ​Sterling scored a hat trick too. 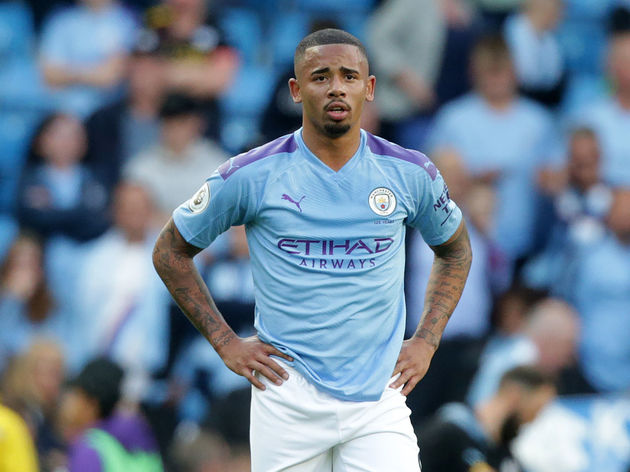 It feels harsh to call this performance their 'worst'. They were absolutely brilliant and pretty much spanked Spurs. But a 2-2 draw at home to ​Tottenham has to be labelled their worst.

The reason for that is they simply didn't take their chances and left just enough gaps at the back to be punished by the visiting side.

They played brilliant football, with wave after wave of attack, but just couldn't score a third. It was very much a bad day in the office in terms of putting the goal into the back of the net. Aguero's second goal against Brighton was such a typical City goal. Lovely football, quick one touch play on the edge of the box, then a beautiful curling shot into the top corner.

It was a strike we have seen from ​Aguero so often, but it made it no less glorious. The master marksman has started the season on fire, and that goal just summed it up. It has been a near perfect start to the season for City, and their performances have illustrated that, despite not having four wins from four.

Aymeric Laporte's injury will come as a major blow, but that shouldn't take away from their fine start to the season. They're on course for another hugely successful season.