Manchester City produced a devastating second-half comeback to beat Sunderland 3-1 in the Capital One Cup final.

Stunning goals in quick succession from Yaya Toure and Samir Nasri turned the game on its head after on-loan Liverpool striker Fabio Borini shot Sunderland into an early lead at Wembley.

Substitute Jesus Navas then secured what City hope will prove the first of multiple trophies this season by finishing off a Toure-led break in the last minute.

It was a powerful fightback after a lethargic first-half display from City.

At half-time, many at Wembley were sensing a repeat of last year's shock loss to rank outsiders Wigan in the FA Cup final.

But now City have the platform to push on for potential further glory in the two other domestic competitions.

They were surprisingly overpowered by Sunderland's energy and enthusiasm in the first half.

Gus Poyet's side were first to most loose balls and fully committed in the tackle.

One crunching challenge by Phil Bardsley on David Silva in the opening minutes set the tone for their whole-hearted display. 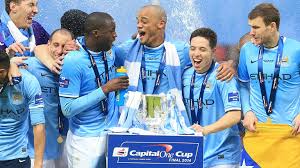 They caught City with a good counter-attack but the often-maligned Martin Demichelis forced Borini towards the corner and the Italian was caught offside as he attempted to exchange passes with Adam Johnson.

Sergio Aguero, back in the City side after a five-game absence with a hamstring injury, had the first serious opportunity of the game.

The Argentinian evaded defenders as he ran across the edge of the box and then tested Vito Mannone with a powerful low shot.

Yet while it might have seemed that Aguero's return would give City a cutting edge that could seriously trouble Sunderland, it was the Black Cats who were the more incisive before the break.

For the stunning opener, Lee Cattermole won possession from Fernandinho in his own half and found Johnson out wide.

The former City winger released Borini with a long ball which dropped beyond Demichelis.

There was still work for Borini to do as Vincent Kompany came back, but the Belgian missed an opportunity to clear and the striker raced clear on the right to bend a fine low shot beyond Costel Pantilimon.

City's response to the goal was sluggish and Borini threatened again with a shot that was deflected over.

Manuel Pellegrini's side struggled to gain momentum but Aguero did make one burst down the right to set up Nasri, however Mannone saved comfortably.

City were in trouble again when Johnson wriggled past Demichelis but Kompany intercepted his cross.

Kompany then partly redeemed himself for his earlier error with a superb recovering tackle to deny Borini, who had raced clear and not been flagged offside when replays suggested he should have been.

Borini also showed his worth at the other end when he headed a Nasri corner clear over his own bar.

Kompany and Demichelis both felt they were impeded as they went forward for a corner just before the interval but referee Martin Atkinson saw nothing untoward.

City instead went in at half-time to regroup and their response when the game restarted was emphatic.

They looked livelier almost instantly and Silva fired a low shot at Mannone.

Pantilimon, starting in place of Joe Hart in keeping with Pellegrini's usual cup policy, was also in action as he palmed over a Ki Sung-yueng drive.

But City began to apply more pressure and their fans, who had been outsung by their passionate Sunderland rivals before the break, responded vocally.

The game changed in the 55th minute as Toure, with almost nonchalant ease, looked up and swept a brilliant first-time shot over Mannone from long range.

Sunderland barely had time to gather their thoughts as, less than two minutes later, Nasri put City ahead.

Aguero found room on the left and whipped in a cross which, although deflected, bounced into Nasri's path and the Frenchman lashed a powerful swerving shot just inside the left post.

As City celebrated it was clear Sunderland were facing a huge test of resolve and Nasri went close again with a dipping shot, but the Wearsiders battled on.

Johnson and Sebastian Larsson made way for substitutes Craig Gardner and Steven Fletcher on the hour as Poyet looked to inject more energy.

Sunderland unsuccessfully appealed for a penalty for handball against Toure and Pantilimon saved from Jack Colback.

But City had become the dominant force and Kompany volleyed wide at the near post from a Nasri corner and Pablo Zabaleta narrowly missed the target from distance.

Navas instead finished the job, firing under Mannone after a strong run by Toure.