Late goals see City come from behind and sink Watford 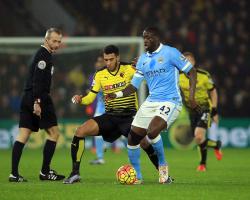 On an afternoon when wins for rivals Arsenal and Manchester United made a positive result even more crucial, Aleksandar Kolarov's own goal appeared to have given Watford their latest win.

However, Yaya Toure and Sergio Aguero rescued City with two fine goals in the final 10 minutes to keep third-placed City within three points of leaders Arsenal.

The expensive, uncertain, yet talented central defensive combination of Eliaquim Mangala and Nicolas Otamendi clearly needs longer to adjust to the demands of English football

In that context, City manager Manuel Pellegrini must have been concerned about the potential impact of Troy Deeney and Odion Ighalo.

Both Watford strikers have thrived this season through employing physical tactics - and against more experienced opposition - and it would have come as little surprise had they again targeted City's inconsistent defence.

As early as the second minute Deeney showed his confidence with a run that led to Almen Abdi sending a promising 25-yard shot both high and wide, and shortly after Ighalo first encountered the ÃÂ£32million Otamendi.

In this instance the Argentinian defender impressed when, with Ighalo in space in the area following Abdi's through-ball, he read the striker's shot to lunge and deflect it out for a corner.

Ighalo swiftly threatened, again having been played in by Abdi - but when he produced a nice turn to beat Otamendi, City goalkeeper Joe Hart reacted to rush out, dive, and smother his shot clear.

City's response came through strikes from Kevin de Bruyne and Fernandinho, both of which Watford's Heurelho Gomes comfortably saved, but beyond Aguero's runs and a 25-yard, swerving shot from Kolarov which went just high and wide of the left angle, they rarely looked like scoring throughout the first half.

Watford similarly began the second half with greater promise.

There would have been a time when, particularly while comparing their resources with City's, 0-0 would have been an encouraging scoreline but manager Quique Sanchez Flores has quickly organised them into a strong team that has little reason to be intimidated.

A powerful header just over the crossbar from Fernandinho served as a reminder of the quality City possess and how quickly they are capable of changing a game, but almost immediately after - in a demonstration of why that quality alone cannot always be relied upon - Watford took the lead.

Taking an inswinging corner from the left, Ben Watson's accurate delivery troubled City's defence, evading everyone except for Kolarov, whose header served to help it into the back of the net

It was recorded as an own goal, even if it was already going in, and again highlighted the damage caused by the absence of City's authoritative captain, Vincent Kompany.

Toure, so often decisive, soon struck beyond the crossbar from the edge of the area, and Kevin De Bruyne forced a routine save from Gomes - but Watford's discipline meant only a moment of quality looked likely to rescue them, and so it ultimately proved

The midfielder has this season occasionally looked in decline, but when Kolarov sent in an 82nd-minute corner from the left, Toure casually and classily volleyed into the top left corner to equalise

From space on the right wing, Bacary Sagna curled a superb cross towards Aguero, and under little pressure the forward headed beyond Gomes and into the back of the net, improving City's title prospects in the process.