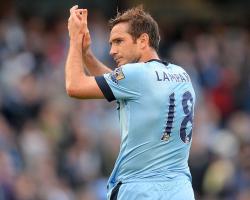 The 36-year-old, the Stamford Bridge side's all-time record goalscorer, came off the bench to cancel out Andre Schurrle's 71st-minute goal after Pablo Zabaleta had been sent off for a second bookable offence.

His appearance off the bench brought cheers from the visiting supporters but it was the home fans celebrating at the final whistle as they rescued a point.

"It is completely surreal," said Lampard.

It was a pretty special day.

"Had it not been against Chelsea there would have been a bit more excitement on my face (when he scored) but after 13 years there the reception I got throughout those years and when I came on I am not going to react another way.

"When the dust settles I can reflect on this and say it was a good day as no one lost and we fight on now in a very close Premier League."

Despite going down to 10 men with 20 minutes remaining and then conceding moments later, City pressed forward as they knew defeat would leave them eight points behind the leaders and they got the point their performance deserved.

"There is a lot of character and I've seen that from the minute I walked in," Lampard told City TV.

"There is a determination that starts with the leaders in the team - Vincent (Kompany), Yaya (Toure), Harty (Joe Hart); people with big voices

Milly (James Milner) was fantastic and (Eliaquim) Mangala was amazing on his debut.

"When we had 11 men we were the stronger team and when we went down to 10 men I think the desire to get back (into) the game meant you didn't even notice we had 10.

"They are all important points

We had a tough start on paper and we are further behind than we would like to be but if we get some flow we can get right up there and we deserve to be right up there."

City manager Manuel Pellegrini believes Lampard's experience can only benefit his side.

"When I spoke with Lampard (about joining City) it was because I was absolutely sure he will be a very useful player for our team," he said.

"He has nothing to do in New York until January when they start the season there.

Pellegrini claimed Chelsea played like "a small team" and likened their approach to Stoke, who recorded a surprise victory last month.

"It think we played 90 minutes against a small team trying to defend, trying to keep 10 players in front of their goal, and (we were) a team that wanted to win from the beginning," he added.

Chelsea boss Jose Mourinho, whose relationship with Pellegrini dating back to their time in Spain could be described as frosty at best, rejected the accusations

"Many times he says he never speaks about me and my team but he keeps doing the same thing," said the Portuguese.

"I am the one that does as he says. I don't comment on his words. Don't ask me about his words, I am not interested in that."