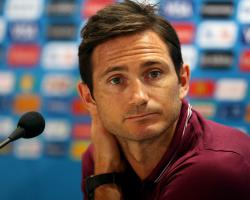 The Manchester City midfielder, on loan from New York City, feels that the influx of top European talent is a major driving force behind the stagnation of home-grown talent

Lampard, who retired from England duty with 106 caps after the World Cup, reflected on his progression through the ranks at West Ham and believes it is a lot different for English prospects today.

If I was the same age now I wouldn't be anywhere near the Chelsea or Manchester City sides," he told The Sun

"Like the other kids I'd have had to go out on loan."

The 36-year-old, who is Chelsea's all-time leading goalscorer after spending 13 years at Stamford Bridge, acknowledged that coaching facilities are better than ever but there comes a time when players just need games

"If it was my boy I'd think about sending him to Chelsea to have the best coaching from eight to 15 and, if possible, then send him to a club with less resources to try and get him in the first team at 18," he added

But the kids these days get lost

"There's a stagnant patch where we hear of these good players of 15 and 16 and wonder where they are at 21."

"He had his moments but I still think he got a bit downbeat about it," Lampard said

"From being talked up he was always having to go out on loan - and where do you go from there? if the door's shut, it can stay shut."

However, the seasoned midfielder also thinks young players in this country can often get ahead of themselves to make matters worse

"Then there's the fact these young lads have to focus and keep their heads when they start to earn very good money," he said

"They have to realise they haven't made it just because everyone is talking about them at 18."