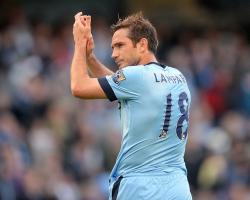 Lampard scored a dramatic equaliser for City in the 1-1 draw against Chelsea on Sunday but it has now emerged he could also be available for the return fixture.

City boss Manuel Pellegrini confirmed that a decision on Lampard's move to New York City FC will be taken in January - the club's inaugural MLS season does not start until March - meaning the former England midfielder could have an emotional return to Stamford Bridge.

Pellegrini told a news conference: "Frank will stay until January because until January he doesn't have anything to do in the United States because they are not working

In January, we will see what happens here and make a decision

It is not a problem in this moment.

"It (his goal) was important because it was the goal that allowed us not to lose that match."