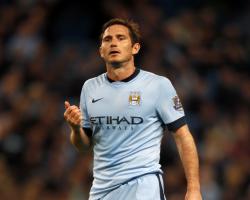 That announcement has delayed his debut with sister club New York until midway through their first Major League Soccer campaign to the anger of many fans in the United States.

On Thursday, the Premier League announced that, after reviewing Lampard's status, it was satisfied his contract was solely owned by Manchester City with no agreement in place between the two clubs - which sparked fresh speculation he might never play in MLS

But Lampard issued a statement via his representatives on Friday which said he does have an agreement in place with New York and will move there in the summer.

"I want to make it completely clear about my situation as I have read a lot of lies and nonsense over the last few days," the statement, released via Steve Kutner Management, said

"When released from Chelsea last year at the end of my contract I signed a commitment to play for NYCFC for two years starting January 1, 2015

I was then offered the chance to train and be part of the Man City squad in the interim to keep myself in the best shape going into New York.

"This period has since been extended by Man City and I will now start playing for NYCFC at the end of this current Premier League season.

I can say that I am very excited about arriving in New York and giving everything to the team to make us a success in the MLS as soon as possible.

"Thanks everyone for your ongoing support and I wish everyone a healthy and happy 2015!"

Lampard's assertion that his New York City contract was originally due to start on January 1 may add further confusion as, when the MLS franchise originally announced his signing in July 2014, they said on their website: "New York City FC signs Frank Lampard to a Designated Player contract ..

Manchester City and New York City, both part of the City Football Group, have been criticised on both sides of the Atlantic for their handling of the situation

Lampard's move to the Etihad Stadium was initially thought to be a loan, and it only emerged that he was fully registered with the club after his deal was extended on December 31.

With Yaya Toure heading to the African Nations Cup, City were understandably keen to keep Lampard after his return of seven goals, largely as a substitute, but in doing so they have angered the fan base of New York City before they have kicked a ball in competitive action.