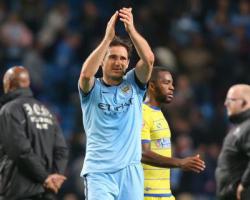 The holders launched their defence of the title in the third round by routing their Championship opponents 7-0, with all the goals coming in a frantic second half.

Lampard scored the first and last and put in a man-of-the-match performance three days after coming off the bench to score an emotional equaliser against former club Chelsea.

Pellegrini is spoiled for choice in midfield, but the City boss said: " For me it's never difficult to put a good player in the team

The problem is when you don't have the players

"Maybe he's now 36 years old and he can't play three games in a row but he's a top player."

The deal is until the start of January but, with the Major League Soccer season not beginning until March, Lampard's form has led to speculation that Pellegrini will try to keep him for longer

The Chilean said: " At the moment I think it's not the most important thing

We'll see what happens in January

We must talk about a lot of things but it's not impossible."

However, once Lampard bundled home the opener two minutes after the break, the floodgates opened

The result ended a run of four games without a win, and Pellegrini was particularly happy with the manner in which his team played in the second half

"Maybe it was the change of attitude in the second half," he said

"I think we were more aggressive.

"When Sheffield played with one player less, of course it was easier for us, but when we scored the fourth goal, I think that is the way this team must play and the best reward is playing that way, more than the amount of goals that we scored."

He said: "We had a nine-minute mad period where they scored three goals

"After the sending off it was damage limitation

"Gary Madine had a reasonable half-chance, and it's about taking your chances