Kompany thinks win has got City back on title track 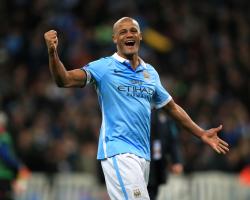 City thrashed the Premier League's bottom side 4-0 on Saturday to move within two points of third-placed Arsenal with a game in hand.

It was a much-needed victory after a poor performance at Liverpool on Wednesday saw City slump to a third successive league defeat.

But Kompany felt those bare statistics were not a true measure of form as City also won the Capital One Cup and claimed a notable Champions League win at Dynamo Kiev in that time.

Kompany said: "It's been an awkward week but if you actually look at the last four games we've won three of them

They were over different competitions.

"For the whole team it's now important to get to the level we showed here.

"Actually in the last four games we've shown three times that we can achieve a very good level of play. That's what we've got to maintain from now until the end of the season."

City were far too strong for a seemingly doomed Villa side, for whom defeat was a 19th of a dismal campaign

City were frustrated in the first half but the floodgates opened after Yaya Toure found a way to open the scoring after 48 minutes.

Kompany said: "It took us a while to break them down but once we did we had the goal difference in mind. We couldn't have hoped for a better day.

"We had to stay patient. We had some good chances early in the first half but they were really tight and difficult to break down. As soon as we did score it made it a little bit easier to create more chances."

City remain 10 points behind leaders Leicester but their extra game offers reason for optimism and the club hope they can now mount a late charge similar to those that proved so successful in 2012 and 2014.