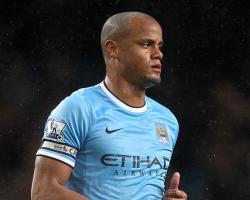 City head into their final Barclays Premier League game at home to West Ham on Sunday knowing they probably only need a draw to secure a second crown in three seasons.

With a two-point advantage over Liverpool and a superior goal difference, the odds are heavily in their favour - but the potential for a tension-filled ending still exists nevertheless.

City famously struck twice in the dying moments of their final game against QPR to snatch the title on goal difference from Manchester United two years ago.

Kompany hopes the experience of that dramatic finish will help guide them through this time around.

The City captain said: "We have been in this situation before.

"That gives you that little bit of time to take a deep breath and keep an overview of the situation.

"Two years ago it felt very full on, the whole game

"I think this year we will hopefully only have to show our emotions at the end of the game.

"There is no guarantee, that is one thing we have learned, but we have won a lot of games at the Etihad.

"We just need to put ourselves back in the mindset that we can carry on winning games here.

"I am sure Liverpool players and fans will still hope as well, so therefore we just need to do our job."

Manuel Pellegrini has called on his team to finish the job in style, sticking to the attacking principles that have been their hallmark throughout the campaign.

Kompany intends to adhere to that with the thought of a draw being sufficient not under consideration.

The influential defender said: "Everyone wants a win, and that is what we are going to play for

That is the right approach.

"We need to stay focused and put in one of those performances again that will hopefully give us the title on Sunday.

"We now have three days - stay calm, rest and recover for what should be the most important game of the season."

City put themselves in such a commanding position with an ultimately convincing 4-0 win over Aston Villa at Eastlands on Wednesday.

The crowd appeared to grow increasingly restless throughout a goalless opening 64 minutes but City did not look back after Edin Dzeko finally broke the deadlock.

The Bosnian added a second eight minutes later before substitute Stevan Jovetic and the rampaging Yaya Toure - with City's 100th league goal of the campaign - wrapped up the scoring late on.

Kompany insists the players were always in control of the situation, whatever feelings may have been present in the stands.

The 28-year-old said: "I think for 10-15 minutes at the back end of the first half we showed a little bit of nerves, maybe, but you can't say it is a negative if you have 75 very good minutes, where we were very professional, very organised, disciplined and didn't give a lot of chances away.

"Eventually we scored and then we knew the game was going to change."

Arsenal spent most of the first half of the season at the top of the table with Chelsea and Liverpool then having spells at the summit.

City, due largely to having games in hand as they pursued other trophies, have featured at the top only briefly.

They appear to have claimed first place at just the right time, however, and Kompany knows that is all that matters.

The Belgian said: "It has never been a case where we have been able to measure ourselves against the other teams because we were always two or three games down on people.

"But it is all about the last game of the season

If after the game against West Ham we are top of the league everyone will be pleased."

For Villa, manager Paul Lambert was left to reiterate his call for more investment after another difficult season.

The Scot, whose side conclude their campaign at Tottenham, said: "We have lost big players - (Christian) Benteke, (Libor) Kozak, (Jores) Okore, (Gabriel) Agbonlahor (to injury) - if it is not staring you in the face what needs to be improved, then you will never get it.

"I have always been really pleased with their effort

They have given absolutely everything

That is all you can ask for but the club needs players."