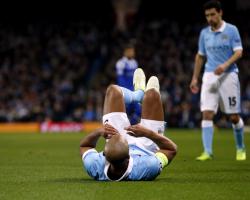 The calf problems that have bedevilled City's inspirational captain flared up yet again early in the dull goalless draw with Dynamo Kiev that guaranteed the club a last-eight place for the first time.

The Belgian was immediately ruled out for at least a month, dealing a big blow to City ahead of Sunday's derby against Manchester United and as they look to secure a top-four finish in the Barclays Premier League.

To compound woes, fellow centre-back Nicolas Otamendi also hobbled off with a dead leg but their team-mates fared well enough without them to ensure last month's 3-1 win in Ukraine was enough go through.

Manager Manuel Pellegrini said: "Vincent unfortunately again has a muscle injury in his calf, the same problem as he had before.

"We will know maybe tomorrow or the day after how important it is, but always a muscle injury is a minimum of one month.

"I think he must be very strong with his mentality. It is very difficult to accept it, but there is nothing he can do."

The news on Otamendi was at least more positive with City hopeful the Argentinian could even be back in action at the weekend.

"He has an important kick," said Pellegrini

"I think that will just be a couple of days and he may recover. We will see the way it develops over the next days."

"I am happy with the achievement. It is important for the club to be improving every season.

"In the last two seasons we have been unlucky in the round of 16 - we were unlucky to play Barcelona. This year we have arrived and it is history.

"It was a tactical game, we didn't take any risks, just (played) to qualify and waited to see if they gave any space - but they played a quiet game."

City will now hope for a favourable draw in the quarter-finals, and for Pellegrini that simply means avoiding champions Barcelona.

He said: "I think when you're at this stage all the teams are very difficult, but I keep having in my mind that there is a team that is better than all the other teams. That is Barcelona."