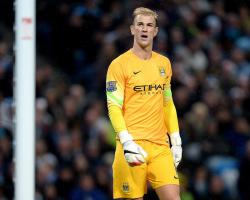 Hart looked to have done enough to earn City a point from a pulsating Group E encounter as he returned to his best with a series of outstanding saves at the Allianz Arena.

But just moments after he made a fine one-handed stop to deny former City defender Jerome Boateng, his old team-mate struck from the edge of the box in the 89th minute thanks to a slight deflection off Mario Gotze.

Hart said: "We did okay and looked like we were going to get a result out of it, which would have been a good start to the group away against a good side.

"But it was an unfortunate deflection that ended up going in, and that killed us.

"I had a bit to do, but we defended well on the whole and had a few chances

It could have been the perfect performance and we come away with a 1-0 win, but unfortunately we ended up with a loss."

Hart's performance bore similarities to another outstanding display against Borussia Dortmund two years ago, when he almost single-handedly defied the Germans at the Etihad Stadium.

Since then, however, his position has been questioned a number of times with a clutch of errors leading to a spell out of the side last autumn.

The England keeper said: "I always seem to have plenty to do when we play in Germany, against good sides, but unfortunately it didn't affect the result.

"I'm not here for headlines - if I was, I would probably have quit

It would have been a good game if we had got the result.

"The only way it would be a good game for me would be if we win the group on goal difference."

Hart was especially hurt that the identity of the goalscorer was a former team-mate, but felt he would have stopped the long-range shot without the deflection.

The 27-year-old said: "Jerome's a good guy and someone I got on well with - you can't hold personal grudges on a football field.

"It was the deflection more than anything

"It was tough, but away from home against Munich you are going to play a bit differently than you would at home and they maybe needed the win that little bit more than us

That makes it a little more disappointing."

City manager Manuel Pellegrini could not carry out any post-match media duties because of his touchline ban.

Instead his assistant Ruben Cousillas, who called the shots from the technical area, spoke of City's misfortune.

Cousillas said: "Definitely we are frustrated

We played a really good game and also (gave) good entertainment for the people.

"We had two teams trying to score goals but to concede in the last minute was frustrating.

"It's the first game, we have only just begun

We can still be first in the group."

Bayern coach Pep Guardiola felt his side underperformed, despite creating the majority of an entertaining game's chances, but paid tribute to City's resilience.

In the first 20 mins Manchester were better than we were but the last 15 minutes we dominated.

We played with a lot of courage and we won and we earned it.

"I know Manuel Pellegrini very well, his defensive movements in the back line are first class, almost perfect.

We tried, we made everything and we deserved it.

"We know how difficult this group is

We know it will not be decided until the last game so to start with this victory is very important for us."