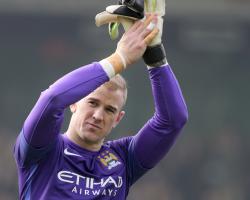 City are hoping to secure a place in the quarter-finals for the first time as they host Dynamo Kiev in the second leg of their last-16 tie on Tuesday holding a 3-1 aggregate lead.

England goalkeeper Hart said: "It's going to be difficult

It's a really difficult tournament, but we've got to believe we can win it - otherwise there's no point in turning up.

"You could look at it as pressure, but it's something really exciting. I can only speak for myself, but it's really exciting being in this situation, going into the last-16 game with a good option of going through, doing something I haven't done before and creating history for this club."

After group-stage exits in their first two seasons, they were knocked out by Barcelona in the first knockout round in 2014 and 2015.

Bettering that this time will continue the upward trajectory and further enhance the club's name on the European stage.

Hart, 28, said: "You've got to do well in Europe to get that label. We're fighting on a personal basis, a team basis.

"We've worked hard, we've been together a long time now and we need to improve, because it's a short career and we have to take advantage of the opportunities we've got at this club."