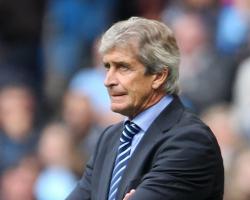 City were fined Â£49million and restricted to spending no more than that in this summer's transfer window after UEFA found them to be in breach of the regulations, which impose an upper limit on clubs' monetary losses

Their European squad was also cut to 21 players instead of the standard 25.

Pellegrini told national newspapers: "I really do not understand what Financial Fair Play is

For me it is impossible.

I understand that if you have a big debt you don't pay, you have to be punished, but I do not understand exactly what is Financial Fair Play."

Despite the cap on their summer spending, City signed Â£32m defender Eliaquim Mangala from Porto - and have yet to play the France international, with Pellegrini preferring Martin Demichelis alongside captain Vincent Kompany.

"We thought we needed a good defender but not necessarily in the month of August or September," said the manager

"We needed a young defender and we thought Mangala was the correct player.

"We will see when he starts playing

He will play but he does not have to play immediately

It is four months without him playing a game but why must we start him immediately when we have two good defenders?"

Meanwhile, goalkeeper Joe Hart admits he has had no talks with the club over a possible new contract.

The England international is tied to the club until the end of next season but, while he has been first choice so far this term, he faces competition from summer signing Willy Caballero.

Hart has also seen the likes of David Silva, Sergio Aguera and Kompany sign new deals but has had no hint he is next in line.

"If a new contract is on offer then it's news to me," he said

"I've got almost two years left on my current deal and that's all I know about my contract situation."