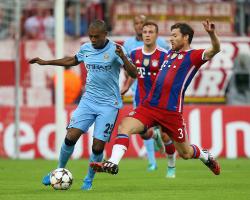 Fernandinho believes City can take much from their performance at the Allianz Arena, which ended in an agonising 1-0 defeat after a last-minute goal.

Former City defender Jerome Boateng struck a deflected winner with just moments remaining after it seemed the brilliance of goalkeeper Joe Hart might have secured a point.

It was a blow for the Barclays Premier League champions, who after three years doing little more than gaining experience in the competition hope to challenge for the crown this time.

Bayern's dominance over 90 minutes meant victory was not undeserved, but City showed resilience and had chances of their own and Fernandinho has no doubt they can compete at this level.

The Brazil international said: "I think so, especially like we have played here

We created some chances to score goals, we (could have) had a penalty for us.

"Unfortunately we conceded the goal at the end of the game.

"But in the Champions League you have to keep the concentration to the end, then we wouldn't get beaten or concede a goal."

City can take encouragement from the chances created for Edin Dzeko and David Silva, who also had a good penalty appeal rejected.

But the result leaves them already playing catch-up in a tough Group E, with their next opponents Roma having opened their campaign with a 5-1 win over CSKA Moscow.

First the attention must switch back to their Premier League title defence and a tough clash against leaders and favourites Chelsea on Sunday.

The match may also be important for confidence as City have now not won in three games, with the Munich loss coming after a defeat by Stoke and a draw at Arsenal.

Fernandinho said: "That is not easy (to take) for a big team such as City, but the best way to recover our confidence and our best qualities is to win the next game.

"Already we think about the Chelsea game

We have to win this game because we have had a draw against Arsenal and a loss at home to Stoke.

"We have to recover points to think about the top of the table."

Fernandinho had a busy night at the Allianz Arena, having to drop back to bolster the defence as Bayern mounted wave after wave of attack.

Some critics even suggested the 29-year-old was also taking on the defensive duties of his midfield partner Yaya Toure, who rarely got back and was not his usual rampaging self with possession either.

Fernandinho, who enjoyed a successful first season at City last term, had been easing his way back into action after his involvement in the World Cup.

This was the first game I have played 90 minutes.

"For me the Champions League is a little bit special

I have to play in this competition

I give 100 per cent always and this wasn't different."

There was no doubt who City's star performer was, with Hart producing a string of brilliant saves to deny the likes of Thomas Muller, David Alaba, Robert Lewandowski and Mario Gotze.

It looked like being his night when he made another fine one-handed stop to deny Boateng with the clock ticking down, only for his former team-mate to get lucky with another strike moments later.

It was almost a reputation-restoring display by Hart, whose loss of form last autumn led to a short spell out of the side and questions have persisted over his consistency since.

"He showed why he is the number one for England."