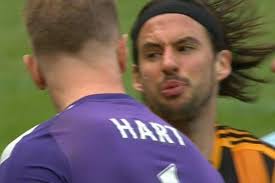 Hart squared up to Boyd after he went down in the penalty area, with the England international accusing the Hull striker of diving.

The pair were separated following a heated exchange, and both players were defended by their respective managers.

MOTD pundit Alan Shearer: "There is no place in the game for what Boyd did, and the FA should look at that."