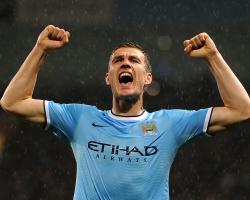 Villa resisted until the 64th minute at a sodden Etihad Stadium, but a quick-fire Edin Dzeko brace put the hosts ahead and late goals from Stevan Jovetic and Yaya Toure took City's goal tally to 100 in the league.

City's victory eliminates third-place Chelsea from the title race and means that they will be champions for the second time in three years if they avoid defeat at home to West Ham United on Sunday.

Manuel Pellegrini's side lead by Liverpool only two points, but they can afford to draw on the final day because they have a goal-difference advantage of +13 over Brendan Rodger's men, who host Newcastle United.

While Liverpool and Chelsea have slipped up spectacularly in recent weeks, City have now won four games in succession, and they will have Chelsea's Premier League record of 103 goals in their sights against West Ham.

In his programme notes, City manager Pellegrini had demanded "focus and complete concentration" from his players, and despite the absence of injured top scorer Sergio Aguero, they quickly forced Villa back.

David Silva had an early penalty claim dismissed after being clipped by Ashley Westwood, while Villa goalkeeper Brad Guzan had to save at his near post from Aleksandar Kolarov and block a close-range Toure effort.

Vincent Kompany headed wide after beating Guzan to a corner and Samir Nasri curled off-target following a one-two with Silva, but as the nervousness among the home support grew, so Villa began to threaten.

Jordan Bowery volleyed wide from an Andreas Weimann cross and Weimann himself then gave the hosts an uncomfortable moment by surging away from Pablo Zabaleta on a one-man counter-attack, only to shoot wide.

City soon regained the upper hand, but Silva scuffed his shot from Zabaleta's cut-back and Nasri could only prod wide from an inviting Zabaleta cross in first-half stoppage time.

With nothing to play for, Villa's approach was unapologetically conservative, and there was no change to their approach in the second period.

Kompany was unable to get enough purchase on an overhead kick to trouble Guzan, but the Villa goalkeeper was fully extended by a dipping Kolarov free-kick moments later.

With half an hour to play Pellegrini introduced striker Jovetic in place of midfielder James Milner, and moments later the home fans' increasingly desperate prayers were answered.

After an hour of frustration, the move that brought the goal was one of arresting simplicity

Silva's pass down the inside-right channel freed Zabaleta, who centred for Dzeko to sweep home his fourth goal in three games.

It was five in three moments later, with the tall Bosnian striker tapping home after Guzan had saved from Nasri to set the stage for another title party at the Etihad on Sunday afternoon.

Villa threatened to set up a nail-biting finale when Weimann saw a header hit the bar and bounce on the line, but Jovetic settled any remaining nerves in the 89th minute by steering home from Toure's pass.

There was still time for Toure to apply a stunning coup de grace in stoppage time, powering through the heart of the City defence from halfway and firing past Guzan to bring up his 20th league goal of the campaign.