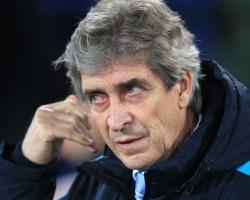 Eliaquim Mangala suffered a hamstring injury in City's defeat at Everton in the first leg of the Capital One Cup semi-final on Wednesday.

The full extent of the Frenchman's problem is still not clear but he joins influential captain Vincent Kompany on the sidelines, leaving Martin Demichelis and Nicolas Otamendi as City's only fit centre-backs.

With potentially eight games in the next four weeks - if they make progress in the FA Cup - manager Manuel Pellegrini could find his resources stretched and other players, such as right-back Bacary Sagna, may need to play centrally.

Pellegrini said: "We will see tomorrow the 11 starters but Bacary is an option to play as a centre-back

He has done it before and he likes to play in that position.

"He is an important option, especially now that Pablo Zabaleta has recovered from his injury and will start playing."

Signing cover during the January transfer window is an option but Pellegrini says that is unlikely.

The Chilean said: "For the moment, we continue with the same squad

I trust a lot in them and in the first four months of the season we could do it, so I think we can finish that way also."

Another idea that has been suggested is recalling the highly-rated 20-year-old Jason Denayer from his loan at Galatasaray but that would require agreement from both clubs and Pellegrini is not currently considering the possibility.

He said: "We will see during January if we change minds for different reasons but at the moment we are not thinking about any options."

Pellegrini will also resist the temptation to rush Kompany back

The Belgian suffered a recurrence of a calf injury on his return to action after a lay-off against Sunderland on Boxing Day and continues to receive treatment.

Pellegrini said: "Vincent is progressing the same way a muscle injury must progress, with time, but you cannot try to hurry him up because he needs the days to have a good calf."

The Argentinian, preferred in domestic knockout games this season, will continue after featuring at Goodison Park.

Pellegrini said: "We are playing so many games it is impossible for the players to work.

For Joe it is very good to have the complete week to work."

Pellegrini has previously spoken about how congested the fixture list can become if challenges are sustained in multiple competitions, and the potential damage that can do.

But the 62-year-old insists he is not worrying about that at this stage and wants to make sure his team stay alive in all four competitions.

He said: "The priority for my team is to have the mentality to try and win every game, it doesn't matter which competition you are playing

After that, you see how many games you can advance in each competition.

"It is important to try to win every game because that gives you an ambitious mind, a winning mind, and a lot of things that for me are very important."