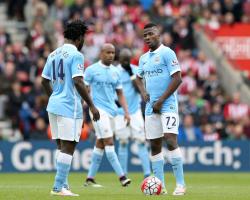 Nigeria hitman Iheanacho struck twice as City's sole positive in a bleak south coast thumping at the hands of Ronald Koeman's Saints, for whom Sadio Mane scored a hat-trick.

The 19-year-old hopes to have earned a start for City's Champions League semi-final second leg at Real on Wednesday night, but admitted Manuel Pellegrini's side saw their preparations dented in defeat at Saints.

"This was not good preparation, this game didn't give us enough confidence but we'll put it behind us as soon as we leave here and focus on the game on Wednesday," said Iheanacho.

"We need to put it behind us, it's gone, it's not going to come back.

"So many things went wrong in the game, we lost so many balls and we didn't defend well.

"We lost so we're not happy, but we'll put it behind us and come back stronger."

Iheanacho took his Premier League goals tally to seven for his breakthrough campaign with his brace at Southampton, a return he hopes can convince Pellegrini to start him at the Bernabeu on Wednesday.

City battled for a goalless draw in last week's first leg, denying Madrid an away goal, but Iheanacho accepts the visitors will face a tough task in midweek.

Pellegrini admitted making eight changes for Sunday's Southampton defeat has jeopardised the Etihad outfit's bid for a top-four Premier League finish, and Iheanacho admitted City have heaped pressure on themselves to qualify for next term's Champions League.

"I think I'm working hard towards it, I'll keep working hard, nothing is enough in football," Iheanacho told the club's website.

"I'm pleased with my performance, getting goals in the Premier League, and I'm happy coming through to the first team this season, working hard to get more goals for them and help them in Europe.

"It was two great goals for me and the team today, but unfortunately we lost so the goals don't mean anything.

"But we'll keep our heads down and focus on the next games.

"We have two games left now, we should keep focused and try to win the two games to qualify for the Champions League for next season."

Shane Long also found the target for Saints to add to Mane's hat-trick, with playmaker Dusan Tadic pulling the strings with three assists.

Southampton boss Koeman conceded Senegal forward Mane must work on his consistency, but insisted that is all part of the 24-year-old's learning curve.

"He's unpredictable sometimes but he was really focused and he was very clinical," said Koeman of Mane.

"Sometimes that was one of my criticisms to all the strikers, that they are not clinical enough, but we are very productive at home.

"We had even more chances to score more than four goals, but it's a great result and everybody enjoyed this game.

"I hope Sadio can be more consistent in future, but of course he's still a young player and sometimes that's a natural part of progress."