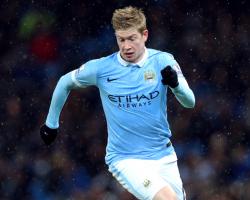 Man City have published photographs of the Belgium playmaker training with strength and conditioning coach Simon Bitcon and with a ball at his feet.

De Bruyne has been out of action since suffering knee ligament damage and a sprained ankle in the Capital One Cup semi-final win over Everton on January 27.

The 24-year-old said last week his recovery was "going according to plan" and he hoped to be back in full training with the squad "after the international break at the end of March".

De Bruyne, signed for a club record Â£54million last summer, has made a big impression at City with 12 goals and 12 assists in 31 appearances.