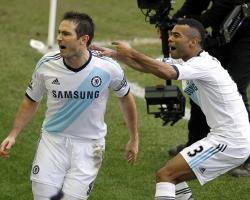 Cole left Chelsea for Roma in the summer and says he is loving life in Italy's capital city, while Lampard arrived at Manchester City on loan, having originally left the Stamford Bridge side for MLS newcomers New York City FC.

The 33-year-old has started four games out of Roma's five consecutive victories in Serie A, including Saturday's 2-0 win over Verona

Lampard, too, has being enjoying an Indian summer with four goals in the last week.

If I am selected and Lamps is selected it would be nice.

"But he's a professional and he has to do a job and that is scoring goals.

"I don't think Chelsea were wrong (to let us go) - a decision was made, I'm fine with it

I had eight great years there and I am really enjoying a new challenge."

Cole admitted there are big differences in Italian football but said that he is relishing the challenge.

He added: "I'm loving Italy - of course it's different to the Premier League, most of the players have very good technique and the Prem is fast and furious at times.

"But we play fast, we like to attack, don't sit back to defend, we have a good mentality and a good manager who is always on at us to go forward and play.

Of course I loved the Prem but this is something different for me now."

Cole admitted that City would be the favourites but that should Roma win it would leave Manuel Pellegrini's men in a difficult place, and that the pressure was all on the home side.

He said: "There's a lot of pressure on City, not so much on us but I know they have big players and are hungry to win the Champions League.

"If we win it will make it more difficult for them to catch up and will probably make us top of the group and put us in good stead for qualifying, but it's going to be a tough game and we don't want to look too far ahead.

"I know a lot of their players and how good they are, but we have a lot of good players as well

We are probably the underdogs but we will give it everything and will give them a tough game.

"It's a new experience for some players but we do have the confidence to challenge the top teams and to come here, play well and not lose the game."

Roma coach Rudi Garcia said the Italian side - runners up in Serie A last season - had the chance to make a real statement about their quality.

"Tomorrow we need to be protagonists and not spectators and make it hard for Manchester City."