City Visit Home Of The Saints

How To Get There And Where To Park

From the M3 take the A33 into Southampton. Continue on the A33 until you reach the junction with the A3024 Northam Road and turn left onto this road towards Northam. Then turn right onto the B3038, Britannia Road for the stadium. 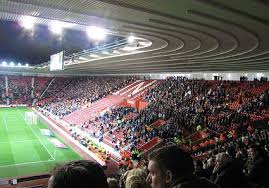 There is hardly any parking available at the stadium for away fans and there are parking restrictions in force for the local area. Most fans seem to be just heading for the city centre car parks and then embarking on the 15-20 minute walk to the stadium. I did this and parked in an NCP car park, which cost £5. I should point out though, that after the game the roads around the city centre become almost grid locked. It took me over an hour to get away afterwards.

Alternatively, on my last visit I noticed a number of fans parking around the Marina area and then taking the ten minute walk to the ground. Parking in this area has the advantage that at the end of the game, you can avoid the city centre gridlock, by heading along the coast on the A3024 and then onto the M271/M27. Steve Ship a visiting Crystal Palace fan also recommends it; 'The Marina is called the Ocean Village which has plenty of parking, but it does charge to park there (we paid £5 for five hours). It is no more than a ten minute walk to the stadium, has a pub on the complex (which had a decent mix of home and away supporters) as well as plenty of food outlets. We left at the final whistle and were back on the M27 within 20 minutes thus avoiding the congested town centre'.

Barry Sear suggests 'I parked in Woolston (on the other side of the Itchen Toll Bridge) where there is plenty of street parking, and made the 15-20 minute walk from there to the ground over the Itchen toll Bridge. To get there, you leave the M27 at Junction 8 and follow the A3025 to Woolston.  I was back on the M27 within 10 minutes of getting back to the car'.

Gavin Ellis a visiting Arsenal supporter informs me; 'There is a park and ride scheme in operation specifically for away supporters. This is situated just off junction 8 of the M27. The traffic in Southampton really made London look provincial, and I'd definitely not recommend people driving into the centre'. This facility costs £8 per vehicle.

John Josephs a visiting Newcastle supporter adds; 'After leaving the motorway at Junction 8 and heading towards Southampton, there are clear AA signs for the Visitors Park and Ride car park which is opposite a big Tesco superstore. I got there at about six which was two hours before kick-off. There were six buses waiting but hardly any supporters. Once there were enough people to fill half a bus it left. 15 minutes later and we were at the stadium'. Mark Glasson a visiting Nottingham Forest fan tells me; ' Although the trip into the ground was outstandingly efficient we were disappointed that now it appears that the Southampton fans and cars are allowed to disperse first at the end of the game while the Park & Ride buses were held back for around 1/2 an hour prior to being released into busy traffic. It was therefore nearly an hour after the match before we were back in our car and able to start our three hour journey home. I feel sure it would have been significantly quicker to park more locally and walk to the stadium.'

Other fans have also recommended the park & ride to me, so on my last visit on a Saturday, I thought I would give it a try. I arrived at the Park & Ride at 11.45am to be informed that it didn't run until 1pm and then 'only if we have enough fans to fill the bus'. I didn't fancy hanging around so I left the car park and drove to St Marys instead. However other fans that I spoke to arriving later found the service okay.

The stadium is located around one and a half miles away from Southampton station (where there is also quite a large car park), which should take about 30 minutes to walk. There is also a shuttle bus in operation taking fans from the station to the ground. This operates from the Blechynden Terrace bus stop outside the station.

Turn left out of the station' s southern entrance and walk up Western Esplanade, which becomes Civic Centre Road. Remain on the Civic Centre Road and walk between the Civic Centre and the Marlands Shopping Centre. Eventually a crossroads is reached with the Nationwide Building Society on one corner and Lloyds Bank on another. Cross into New Road and follow this road across a park and past a college. Eventually you will reach a complex road junction with a number of traffic lights. Cross Kings Way into Northam Road and follow this road for quarter of a mile until you reach the ground on your right. There are signs provided by the local council, which direct fans from the station to the ground.

Thanks to Scott Lydon, Jeff Manning & David Furnell for providing the directions.

You can also walk to the ground from St Denys Station, which is about a 25 minute walk away. This area also has some good pubs. Kay Wilkinson provides the following directions: ' Leave the station on the platform 4 (South Western Arms Pub side) and proceed past the pub, which is on your right hand side and continue on down this road, past the Junction Inn and over the Horseshoe Bridge (this goes over the railway.)  Take the next left, Dukes Road and follow this for about 3/4 of mile past various industrial units and round past Mount Pleasant School, which is on your right.  At this T junction turn left into Mount Pleasant Road and walk over the railway (tip if the train gates are down use the footbridge - you can sometimes wait here for 20 minutes). You then continue along this road, which changes into Radcliffe Road, past the mosque on your right and this road will take you all the way down to the underpass to the Stadium.  This is the most direct route.  If you want to visit the Dolphin Pub mentioned above you exit the Station on Platform one side using the bridge across the road and the Dolphin is directly in front of you.  To visit the Bevios Castle pub follow the directions into Dukes Road and half way down this road is a right turn, this will take you out into Bevios Valley, turn left and the pub is about 3 minutes walk away on a road junction on the right hand side.  To get to St Marys from here you can either walk up the hill following the road continuously, past the hospital and the fire station on your left, when you reach the main road, Northam Road, cross and pass through the bridge to the ground. Alternatively you can walk down the hill and take the first right, Mount Pleasant Road and follow the directions as from St Denys Station above'.

Away fans are located in the Northam Stand at one end of the stadium, where normally up to 3,100 fans can sit. For cup games this allocation can be increased to 4,750. The view of the playing action and the facilities within this stand are excellent. Leg room is good, although the width of the seating seemed to be a bit narrower than other grounds (either that, or I am putting on weight!). The sizeable concourse behind the stand features a Ladbrokes, has TV's which show the game as it is played and a number of eating and drinking outlets. There are plenty of staff and the queues never seemed to get particularly long, which was a pleasant surprise. There is also a 'Pie & Pint' outlet, that as the name suggests, only serves beer and pies. Perhaps they should rename it as 'Heaven'!

I thoroughly enjoyed my visit to St Mary's and would happily return. The stadium has (contrary to other reports) a great atmosphere and the facilities are first class. I particularly commend the Club for the friendliness of their staff, from the stewards to the catering staff. Even as I left the stadium, a steward wished me an enjoyable journey home! Considering that away supporters are almost treated with contempt at some other clubs, this was a refreshing change. Coupled with the relaxed attitude of the home supporters and the excellent facilities, then this to to me makes a visit to St Mary's one of the better days out in the League. Only one minor gripe though, is that away fans are searched before entering the stadium which obviously slows the entrance process down somewhat.

Phil Jones adds; 'There was an excellent view from all around the ground and the atmosphere was good. I was impressed by their having toilet facilities around the perimeter of the ground which are accessible prior to the turnstiles opening. Well done Southampton, it's the little touches like these, for the fans comfort and enjoyment of the day, which make all the difference'.

There are not many pubs located close to the stadium, so the choice for away fans is limited. There is the Waterfront Bar in William Street, which is an area called Shamrock Quay. You can visit the Waterfront Bar website for more details. Nic Hallam a visiting Wolverhampton Wanderers fan adds; 'In the Ocean Village we found "The Admiral Sir Lucius Curtis" public house. This large establishment had an an excellent choice of beers, friendly bar staff and a convivial mix of both home and away fans'.

Most fans seem to end up in the city centre before the game, where there are plenty of pubs to choose from. Paul Hunt a visiting Bristol City fan adds; 'On our last visit the Standing Order Wetherspoons outlet was for home fans only, with bouncers on the door. We ended up in Yates Wine Lodge in the central shopping area. There were also a lot of away fans in the Slug & Lettuce next door'. Please remember though that if you do drink in the centre, that the stadium is a good twenty minute walk away. Otherwise alcohol is served within the ground.