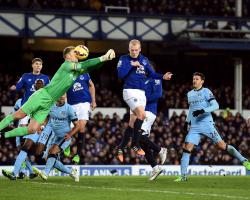 Manuel Pellegrini's side were far from at their best and even the return from injury of leading scorer Sergio Aguero as a second-half substitute could not get them over the line.

Fernandinho put them in front in the 74th minute but Steven Naismith's glancing header earned a deserved 1-1 draw for the hosts.

City certainly missed the commanding presence of Yaya Toure, on African Nations Cup duty with Ivory Coast, and have not won a match in which he has been absent for almost exactly 12 months

While the neat passing was still there the defending champions came up against a block - both mental and physical - once they reached the opposition penalty area and could have done with the Ivorian driving through from midfield to give Everton another dimension to worry about.

But the home side dug in, despite the odd scare, to end a run of four successive league defeats.

City are unbeaten in 14, which includes nine wins and three draws, but with Chelsea winning against Newcastle the find themselves two points behind the outright leaders.

In truth neither side were in top form but that suited Everton more than the visitors.

The tone was set for the first half in the third minute when John Stones delayed his pass back to Joel Robles, forcing the goalkeeper to kick hurriedly straight to Fernandinho - but the Brazilian was equally negligent as he passed to Jesus Navas in an offside position.

While Everton struggled with their decision-making, often hanging on to the ball too long despite all the talk of them wanting their play to be more direct, City were at least more incisive with their passing - although their best openings came from errors from the hosts.

The Toffees have the worst record in the league for individual mistakes which have goals - 11 - and that showed no signs of lessening.

Phil Jagielka allowed Muhamed Besic's pass to bounce off him straight to David Silva, whose probing and movement was an isolated example of quality, but Navas fired wide.

Stevan Jovetic failed to hit the target from three separate chances but it was only Besic's perfectly-judged last-ditch tackle which denied Silca a shooting opportunity after City counter-attacked from an Everton corner.

The closest either side came to scoring was just before the break when Joe Hart came out quickly to block Romelu Lukaku's shot and Seamus Coleman hammered the rebound against the crossbar from distance.

Lukaku's physical presence and pace, which showed signs of returning in midweek against West Ham, gave City's centre-backs - particularly ÃÂ£32million summer signing Eliaquim Mangala - something to think about, however, and when Baines released him down the left his cross-shot was parried behind by Hart.

Aguero replaced Jovetic in the 67th minute but his first effort was a tentative one, volleying wide from outside the area - by which time Everton had already had a goal by Jagielka ruled out for offside against Steven Naismith.

Everton's propensity to hang onto the ball too long may have been born out of a lack of confidence from recent results but Lukaku, buoyed by his goal in midweek, should have had less reason than most to dither.

But dither he did on the edge of City's penalty area and when he was dispossessed by Pablo Zabaleta a quick transfer downfield saw Fernandinho nod home Silva's deflected shot from close range.