Stevan Jovetic claimed his first two Manchester City goals as Manuel Pellegrini's side eased past Wigan into the fourth round of the Capital One Cup.

Edin Dzeko and substitutes Yaya Toure and Jesus Navas were also on target as City completed a routine 5-0 win over the Championship side at the Etihad Stadium.

City had made 10 changes from the side which thrashed rivals Manchester United in Sunday's derby at the same venue but there was no let-up in the intensity of their performance.

From the outset there was never any danger of Wigan repeating their heroic FA Cup final success over City from May. Dzeko opened the scoring with a fine volley 12 minutes before the interval and Jovetic, who had hitherto endured a frustrating night, bundled in the second on the hour.

Toure came off the bench to curl in what is now becoming a trademark free-kick from 20 yards - his third such effort of the season - before £24million man Jovetic netted a second from close range. 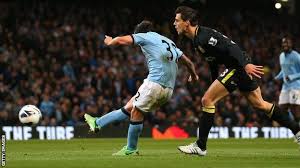 Navas rounded off the scoring four minutes from when he broke through and fired a low shot past Lee Nicholls.

City's style of play and clinical execution were just as manager Manuel Pellegrini had desired, and provided evidence that the fluid system he is introducing throughout the club is taking hold.

Of his starting line-up, only midfielder Fernandinho survived from the side which began the 4-1 derby demolition of United.

Micah Richards came in for his first appearance of the season and impressed after recovering from injury while James Milner looked dangerous on the left and youngster Marcos Lopes had fine full debut.

Championship side Wigan made nine changes from their most recent game while Jordi Gomez, Emmerson Boyce and Roger Espinoza were the only members of their side that started the FA Cup final. Gael Clichy was City's only Wembley survivor.

Dedryck Boyata, back in the CIty side after a two-year absence, had the best of the early chances, denied by Latics goalkeeper Nicholls at a corner, before Richards stole the ball from Nouha Dicko and charged forward to fire a shot narrowly wide.

City almost took the lead after Richards burst into the area on another powerful run and pulled the ball back across goal.

Jovetic lost his footing but 17-year-old Lopes, sprinting in behind, connected with a powerful shot which rattled the woodwork.

The opener came moments later as Fernandinho ran across the 18-yard line and picked the most opportune moment to lob forward for Dzeko.

The striker timed his run perfectly and lunged forward to volley past Nicholls.

Milner continued to cause havoc on the right and another good cross was lashed into the side-netting by Jovetic.

Fernandinho's starring role in the goal proved his last significant involvement as he was replaced by Toure for the second half.

After a Milner shot was deflected on to the post, Toure surprisingly headed wide from the resulting corner.

City's second came on the hour, the opening created after another attack down the right, this time by Richards.

The stand-in skipper slipped in a good pass for Jovetic, who saw his initial shot blocked by Nicholls but the ball rebounded off him and into the net.

A foul by Fraser Fyvie on Jovetic allowed Toure to step up and curl in a free-kick which emulated similar strikes against Newcastle and Hull already this season.

Jovetic bagged his second after Ryan Shotton made a mess of a clearance and Navas raced through a gap to net the fifth in the closing stages. 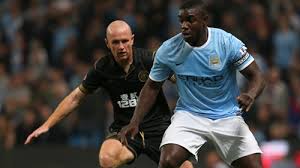