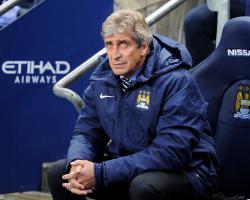 The thought of falling eight points behind by losing at the Etihad Stadium is one Pellegrini does not want to contemplate.

Recent results do not make good reading for City, who have not won in three in all competitions, but Pellegrini is focusing on turning statistics in his favour with a victory.

The Chilean said: "I always try to think of positives, so I hope we are not going to lose and we not going to go eight points behind Chelsea.

"I think we were unlucky in the last two games - against Bayern Munich in the way we lost with that goal and against Arsenal we deserved to win the three points.

We must win our next game at home and with that we will be two points behind the leader.

"That for me will be a very good start after playing Liverpool, Arsenal and Chelsea

That is why it is important to win on Sunday."

City will need to find a way to halt Chelsea's in-form striker Diego Costa, who has hit the ground running at Stamford Bridge.

The Â£32million Spain international has scored seven in his first four Premier League appearances, including a hat-trick against Swansea last weekend.

Another summer signing, Cesc Fabregas, has also made a big impression and quickly built up a dangerous understanding with Costa.

Pellegrini said: "They have very good players and they are in a very good moment, so we have to play a very good game if we want to win.

"For me it is not a surprise

Last year it was a very strong squad with very good players and this year they have increased their squad, they have more and better players.

"But there is a long way to go, it is just four games and we play 38

We will see what happens in future.

"I think that we didn't start badly

Maybe the game we lost here against Stoke that was an unusual game, but we hope we recover here, playing at home, and get three points on Sunday."

City are still without striker Stevan Jovetic and midfielder Fernando due to injury, but Pellegrini is planning to unleash Sergio Aguero.

The Argentina forward has been used only sparingly this term as he is eased back into action following a series of muscle injuries in the second half of last season, including the World Cup.

Jose Mourinho places no significance on Chelsea's double success over City last season as he continues to seek perfection.

Chelsea twice beat City in the Premier League - and lost 2-0 in the FA Cup - only to finish four points behind Pellegrini's men in the race for the title.

The Blues came unstuck against 'lesser' opposition, but have begun the current campaign following a summer strengthening exercise with four wins from four games and sit five points clear of Sunday's opponents.

Mourinho said: "What happened last year and seasons before I don't think has a relation to this season

It's a completely different story.

"It doesn't matter the record we had last season against City

We respect them totally, because they deserve that respect, but at the same time we believe in us and we want to win.

"Can we go there and win like we did last season? Obviously we can, but can we lose? We also can

And I don't think statistics play a part in this.

"I want to win this game to get three points

I'm totally focused on three points and the Premier League 2015, (rather) than history."

Chelsea's momentum was checked by Schalke in midweek as the Blues began their Champions League Group G campaign with a draw; City started theirs against German opposition also, losing at Bayern Munich.

"We had four victories, we couldn't win two days ago," Mourinho added.

"We were always scoring three, four, five, six goals and in the last match we scored only one.

"We try to improve in every aspect

We have to chase that perfection."

Costa will start for Chelsea, despite a hamstring problem

The striker, who has scored seven goals in four Premier League matches, was only a substitute in Wednesday's Champions League draw with Schalke and cannot play more than one full game a week at present.

"He is fresh for Sunday and I am sure he will make a difference."