City may meet Pep sooner than they think 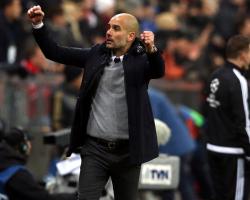 Manuel Pellegrini is leaving the Citizens in the summer but he has guided them to this stage for the first time and could come up against Guardiola, who it was revealed last month would succeed the Chilean.

Bayern came through a scintillating tie against Juventus with an extra-time victory on Wednesday night, with Guardiola striving to end his stay in Germany by winning the Champions League - something he has yet to achieve with the Bavarians.

For Pellegrini, the chance to put one over his successor would no doubt appeal, and the Chilean insisted earlier in the week he would have no concerns coming up against Bayern despite winning just one of their four recent meetings.

"Facing him would not be a problem, no," Pellegrini told the Sunday Mirror.

"First of all, we have to see the draw

All of them (the quarter-finalists) are very good but I prefer to avoid two or three teams, although I won't tell you which ones

Bayern are in bullish mood after their recovery against Juve, with goalkeeper Manuel Neuer telling the German federation's official website www.dfb.de: "I think the better team has reached the quarter-finals

We can now see what happens next and I'm also thinking that no team will want Bayern (in the draw)."

Luis Enrique is now the man in the dugout at the Nou Camp and he has masterminded a 38-game unbeaten run across all competitions and can call upon the stellar strike force of Lionel Messi, Luis Suarez and Neymar, a trio with 106 goals between them this season.

Barcelona are also looking to become the first team to defend the European Cup in the Champions League era and Enrique is happy to take on all comers.

"The only team I don't want to face is Barca, and it's a certainty that we won't,'' he said after a 3 1 victory over the Gunners on Wednesday saw them comfortably through to the last eight.

"Obviously we have unique players but in the end the great thing about this team is they work collectively in both attack and defence."

Spain have two other representatives in Friday's draw, Real Madrid and Atletico Madrid.

Real, 10-time winners of the European Cup, squeezed past Roma to get through with coach Zinedine Zidane no doubt dreaming of leading the club to an 11th crown, having scored a memorable winning goal to deliver their ninth back in 2002

Diego Simeone's side are out-performing Real in the league but needed a penalty shoot-out to see off PSV Eindhoven in the round of 16 following the first-ever Champions League tie to finish goalless over both legs.

Paris St Germain, meanwhile, can turn their full attention to winning their first European Cup with Laurent Blanc's side having already wrapped up the Ligue 1 title in style.

Inspired by Zlatan Ibrahimovic, PSG secured the crown last weekend with a 9-0 hammering of Troyes and will now be looking to complete their transition into a continental super-power having knocked Chelsea out in the previous round.

The two outsiders are Wolfsburg and Benfica, and although neither will be taken lightly the big-hitters will surely be hoping to be drawn against them.

Dieter Hecking's Wolfsburg saw off Gent, as expected, in the round of 16, but are languishing down in eighth in the Bundesliga and have lost nine of their 26 league games this season.

Benfica beat Zenit St Petersburg to reach this stage for the first time since 2012, having been eliminated at the group stage for the past three years.