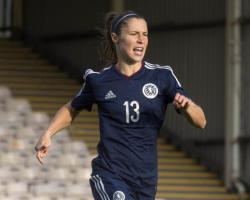 Scotland international Jane Ross opened the scoring - her first goal for City - after the break before Toni Duggan's penalty sealed the victory as City moved top of the early table after winning their opening two games.

The Gunners had Jemma Rose sent off after just 13 minutes for a foul on Ross.

Elsewhere, Liverpool Ladies' trip to Chelsea was postponed due to a waterlogged pitch