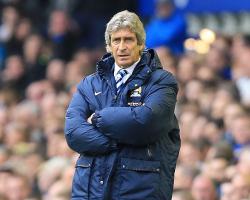 Manuel Pellegrini's men can move two points clear at the top of the table, with just one game to play, with victory at the Etihad Stadium.

The picture has changed considerably since City were held at home by Sunderland three weeks ago - a draw which left them six points behind the Reds with just one game in hand - and Pellegrini is confident the 2012 champions can handle any nerves.

The Chilean said: "We have experienced players, they've been in a similar situation two years ago.

"We have the pressure to win, but we've had it the whole year.

City will be without top scorer Sergio Aguero, who limped out of last weekend's win at Everton with a groin injury.

Aguero has been hampered by muscle problems in the second half of the season, missing 18 of the last 31 games, but has not yet been ruled out of the final game against West Ham.

Pellegrini said: "It was not 100 per cent sure if he was completely fit, that is why I didn't want to have a risk with him, but we will see during the week if he can play on Sunday."

Such has been Pellegrini's focus on the visit of Villa that he claims not to have watched Liverpool's dramatic late capitulation earlier in the week.

The Merseysiders had looked like moving three points clear at the top, and putting City under greater pressure, when they conceded three times in the final 11 minutes at Selhurst Park.

He said: "The Aston Villa game doesn't depend on the result of Liverpool.

"I was watching a tape and working

I knew the result once the game was finished

Other people told me at the end.

All the other things we can analyse when the race is over."

Pellegrini has only occasionally let emotions get the better of him during his first year in English football and he is confident in his approach.

He said: "If I try to be calm it's because I think it's the best way for the players to play these two games."