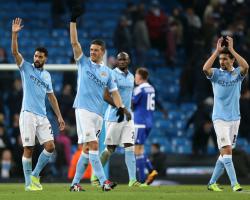 PSG, meanwhile, knocked Chelsea out as the French team look to add the Champions League to their domestic Ligue 1 title.

City are currently fourth in the Barclays Premier League table, four points ahead of sixth-placed Manchester United, whom they host on Sunday.

While not yet conceding the championship race, overhauling a 12-point deficit on leaders Leicester remains a difficult task for Manuel Pellegrini's side, who last month won the Capital One Cup with victory over Liverpool at Wembley

Getting past PSG and into the semi-finals of the Champions League will also prove no mean feat - especially with Vincent Kompany injured again.

Laurent Blanc's men have already wrapped up the Ligue 1 title in style, inspired by veteran Swedish forward Zlatan Ibrahimovic and showed with their 4-2 aggregate victory over Chelsea in the last 16 that they remain very much determined to prove themselves a continental super-power

City and PSG have met just once before, playing out a goalless draw in Manchester during the group stages of the 2008/09 UEFA Cup.