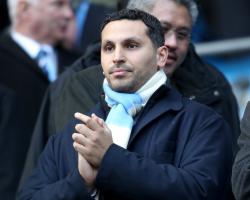 City are keen to build on their success of 2013-14, in which they won the Barclays Premier League and Capital One Cup, even though they face a spending cap as a result of UEFA sanctions.

The European governing body has limited City's net outlay on players this summer to £49million as one of their punishments for breaching financial fair play regulations.

But City said last week that figure would have no "material impact" on planned transfer activity that Al Mubarak now says will begin imminently.

Al Mubarak told City TV: "We know exactly what needs to be done

"I can tell our fans to expect, as last year, an efficient and swift execution plan.

"We will have, after the World Cup, a good pre-season and we will go into the season very ready, as we did last year, to compete for four championships."

City's actions last summer, including the sacking of Roberto Mancini as manager, put the club back on an upward trajectory after a relatively disappointing end to the 2012-13 season.

Al Mubarak reported that owner Sheikh Mansour of Abu Dhabi has been delighted with the progress in the past 12 months.

He said: "Sheikh Mansour feels this club is doing exactly what he intended it to do in terms of performance across the board - on the field, off field, trophies, championships and wins, but also commercial success, and the fans' support has been unwavering

Genuinely, Sheikh Mansour is absolutely delighted with the way this club, this company, this business is performing."

City did attract criticism after parting company with Mancini, as the Italian had led the club to their first title in 44 years in 2012.

But Manuel Pellegrini has proved a popular, reliable and successful replacement and the club feel their decision has been vindicated.

Al Mubarak said: "The decision to hire Pellegrini was a very important decision for us as we look at the next couple of years.

"I am absolutely delighted for him, for the fans, for the club, for everyone involved at Manchester City.

"It is a perfectly justified decision

I think the results speak for themselves."

One of the next targets for City will be to carry their domestic pre-eminence onto the European stage.

Some progress on this front has been made under Pellegrini, with the club reaching the Champions League knockout stage for the first time.

Al Mubarak said: "This year we have made some progress

We have played much better football, been a lot more competitive and I think the experience coming through the two games against Barcelona will be invaluable for us.