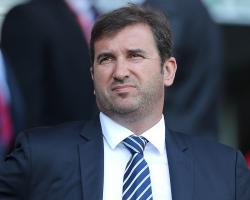 The partnership was announced in conjunction with the Marinos' owners, car manufacturer Nissan, and will see the four-times Asia champions gain access to the coaching, management, medical and sports science expertise of the City Football Group.

City chief executive Ferran Soriano said: "We're thrilled to be able to play a role in investing and building on the ongoing success of YF Marinos.

"We are proud to offer a collaborative and integrated approach to the football, marketing, media and commercial development of all the clubs in the City family.

"At the same time, we are proud that each of our clubs is firmly rooted and invested in its local community as well as connected and engaged with its supporter base.

"We are very much looking forward to starting our collaboration."

The announcement comes a year after City announced the launch of their MLS project in conjunction with baseball's most famous club, the New York Yankees.

In January, they then acquired an 80 per cent stake in Melbourne Heart as the major investor in a consortium that took over the A-League club.

As well as their Asian titles, the Marinos have won the J-League three times and finished runners-up last year.

Carlos Ghosn, president and chief executive of Nissan, said: "The YF Marinos is an excellent soccer club with a rich history which has grown hand in hand with Nissan.

"This partnership will contribute to the growth of the club, the growth of our shared hometown, Yokohama, as well as Yokosuka and Japanese soccer."