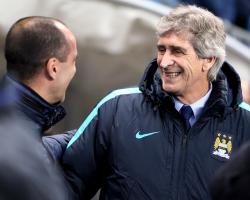 City host the Toffees in the second leg of their semi-final at the Etihad Stadium on Wednesday, a match that is also the third meeting between the two clubs in three weeks.

With City having lost the first leg and been held to a goalless draw by Roberto Martinez's men in the Barclays Premier League, the task is a testing one.

Pellegrini said: "It is the third time we are going to play against Everton in a month, so we know all about their team. We know the way they play and their important players.

"But our performance is more important in trying to decide this semi-final at home.

"It is as important for us as it is them, it is important to play in the final at Wembley.

"Maybe Everton, who have not been in a final in many years, will be more motivated but I am sure our team will do all they can to play the final.

"One of the most important things is to reflect desire, a desire to play another final at Wembley."

City must chase the tie, with a 1-0 victory after 90 minutes enough to secure extra time, but Pellegrini will not let the aggregate score alter his game plan.

The Chilean said: "For both teams it is better not to play extra time but if we need to do it we will

"I think it is more important to start not thinking about what you need and if you score an early goal to think the game is finished. We are not going to change our style of play.

"We need to win here. We will try to score from the beginning."