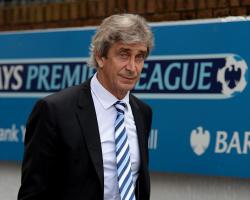 Pellegrini has enjoyed a memorable first season in charge of City, who followed their League Cup success earlier in the campaign by clinching the English crown with a 2-0 win over West Ham at Eastlands on the final day of the season on Sunday.

City finished two points ahead of second placed Liverpool as Chilean coach Pellegrini, who joined City from Malaga after spells at Real Madrid and Villarreal, celebrated his first league title in Europe.

The 60-year-old's calm and dignified personality, as well as his commitment to attacking football, proved the ideal approach for City's players, who had grown tired of the more dictatorial Roberto Mancini long before his sacking at the end of last season.

And French midfielder Samir Nasri, who scored the crucial 39th minute opener to ease any nerves against West Ham, insisted Pellegrini deserved to be acclaimed as the catalyst for City's second title in three years

"He remained calm all season for us to play attractive football and it was a pleasure to work with him," Nasri said.

"There are no words to explain the feeling now

Maybe in an hour or two we will feel it

I'm so happy for the manager because it's his first title in England.

"It's an amazing feeling

My second title in three years

It was an amazing league the whole year

The Liverpool loss against Chelsea, I think that was the twist of the season."

City's players appeared as delighted for Pellegrini as themselves as they grouped together to throw him into the air in celebration after the presentation of the trophy on the Eastlands pitch.

And England goalkeeper Joe Hart agreed with Nasri that Pellegrini should be credited for the way he carefully managed a potentially volatile dressing room packed with vocal and highly-paid stars.

"He is a measured man and he believes in what he does.

The boys that come in buy into it, so it's great."

Pablo Zabaleta added his voice to the chorus of praise for Pellegrini: "Credit to him, it's his first season in the Premier League and he's won it already, so there is nothing more to say."

Hart also admitted it was a nice feeling to win the title with relative ease after the drama of City's title triumph in 2012 when they scored twice in stoppage-time against QPR to pip Manchester United on goal difference on the last day.

"You can't repeat what happened against QPR, that's how it went that day

This year we've come strong at the end when we needed to," he added.

"It was calmer today than the other season, but it was a very tough season

Every team has played a part this season."