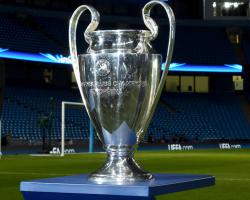 Reports have suggested some clubs are pushing for the competition to be revamped to ensure more blockbusting matches at an even more lucrative group stage.

This could involve an extra knock-out rounds being played early in the tournament to leave 16 teams to go forward to a group stage featuring two pools of eight.

None of this is definitive and with the current TV and commercial rights cycle having only just begun, no changes would take place until the 2018-19 season.

Nevertheless, discussions between clubs and UEFA, the European governing body, on the future are likely to take place this year.

A spokesperson for the European Club Association, which represents the interests of some of the continent's top clubs, said: "There's a lot of discussion around the future of European competitions at the moment, as always ahead of a new competition cycle.

"Discussions are taking place at different levels, but, for the moment, nothing concrete was brought up at ECA

We are at a very early stage and no final decision is expected before autumn this year."

The ideas have emerged just weeks after five of England's biggest clubs - Chelsea, Arsenal, Manchester United, Manchester City and Liverpool - denied they were involved in discussions for a breakaway European Super League.

The clubs had met in London with representatives of Relevent Sports, organisers of the International Champions Cup, and talks had been primarily about their involvement in that pre-season tournament.

But controversy did later arise as Charlie Stillitano, chairman of Relevent Sports, suggested the Champions League could be more successful if it was a closed shop.

He said: "Let's call it the money pot created by soccer and the fandom around the world - who has had more of an integral role, Manchester United or Leicester?

"It's the age-old argument

US sports franchises (no relegation) versus what they have in Europe."

The latest reports do not suggest the Champions League would become an event for the same invited, established clubs, however

The qualification system is not significantly altered but the additional knock-out round, which could be seeded, would limit the chances of smaller sides making it through.

The feeling is this would have enhanced commercial appeal and some may view this as a step towards a European super league.

A UEFA statement read: "UEFA is in constant contact with all stakeholders, including the clubs, on all football matters

Therefore, any plans to evolve the format of our club competitions would be co-ordinated and negotiated together with them.

"There are currently no concrete proposals on the table since we are at the beginning of a new cycle (2015-18) of our club competitions."