Burton 0-1 Man City: Report Ratings & Reaction as the Citizens Cruise Through to the EFL Cup Final

But, hand on heart, Manchester City won the second leg of their EFL Cup semi final meeting with Burton Albion by only one goal to nil. Trust me. 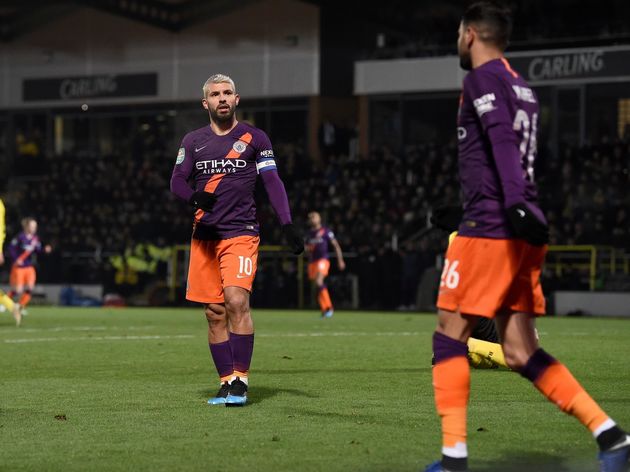 It was clear throughout the game that Pep Guardiola's men had been instructed to 'take it easy' tonight ahead of a crucial run of fixtures throughout the course of the next month or so.

And once the Citizens did take the lead in the 26th minute courtesy of a sweeping finish from Sergio Aguero, they rarely looked to venture forward with the same ferocity we have been accustomed to in recent seasons.

Well, in a game of few - if any - talking points, the main takeaway from tonight's encounter will be Pep Guardiola's team selection.

Here’s how we line up at the Pirelli Stadium 🙌

Although Guardiola did field a number of youngsters (including Phil Foden), both Sergio Aguero and Kevin De Bruyne - two players who was suffered from at least a million injuries apiece of the past 12 months - were surprisingly called upon for what was, in essence, a dead rubber game.

Thankfully for Man City fans, neither of their star men hobbled off with an injury tonight.

It was a risk that paid off in the end, but was undoubtedly not one worth taking to begin with.

The standout performer tonight was Philippe Sandler, who at just 21 years of age, more than held his own at the heart of the Man City defence against a physical Burton Albion outfit.

The Dutch youngster may have just worked himself in Pep Guardiola's plans for the remainder of the season tonight.

For the simple reason that you could tell he genuinely didn't care about playing a game of football tonight, this has to go to Danilo.

He just didn't want to be in Burton.

Manchester City are set to face either Tottenham Hotspur or Chelsea in the EFL Cup final at Wembley Stadium on 25th February.