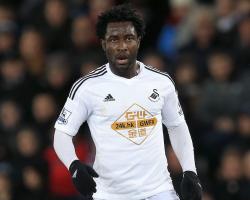 'Striker Wilfried Bony has just signed with Manchester City on this Wednesday, January 14, 2015,' the Federation tweeted through its official account.

Neither Manchester City nor Swansea have made any official comment on the transfer but Press Association Sport understands the two clubs agreed a fee for the Barclays Premier League's top goalscorer in 2014 over the weekend.

Bony underwent a medical on Monday in Abu Dhabi - the home of Manchester City's owners - where Ivory Coast were based before leaving for the African Nations Cup.

The Ivorian has proved to be an inspired signing for Swansea since arriving from Dutch club Vitesse Arnhem in the summer of 2013.

Bony has scored nine Premier League goals already this season and would leave Swansea with 34 goals from his 70 appearances.